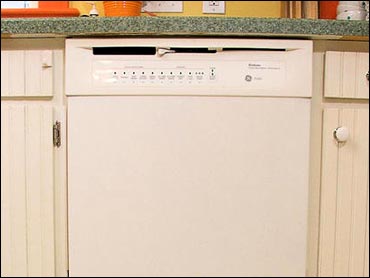 Long rows of refrigerators, washers, dryers, and dishwashers, in appliance stores look a bit like the rows of cars sitting at car dealerships, before the cash for clunkers program cleared the lots.

Appliance store sure hoping to get the same boost from "green for green machines" - or whatever the government nicknames its planned $300 million appliance cash give away, reports Don Knapp of CBS station KPIX in San Francisco.

"The hope is we're going to get a lot of money, and a lot of people are going to come in and buy good energy star appliances that will help the state of California and help us in a hard economy," says Eric Ogrey of Airport Home Appliance.

Appliance dealers don't expect anyone will have to junk a machine to get $200-300 on a new energy efficient one. But details of the government incentive program - which is expected to start in November - are yet to be worked out.

What happened in the cash for clunkers program with cars, people held off buying because they knew the money was coming. People in the appliance business say it doesn't work that way here.

What would a cash incentive mean to shopper Kathleen San Miguel?

"I'd be thinking about a refrigerator and a dishwasher," she said.

But when she learned the government incentive is a couple months away, she said she'd keep looking.

Appliance dealers, looking at how quickly the money went on the clunkers program, worry about cash for appliances.

"They've only allocated $200 million to this program across the United States, with 200 million households that can participate. There's not going to be enough money, it's going to run out quickly," said one dealer.