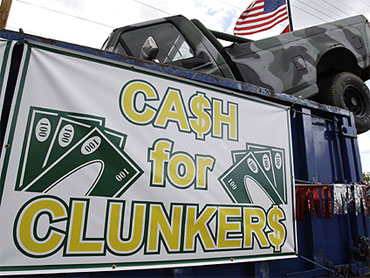 It was a race to the finish for dealers and customers alike as the government's Cash for Clunkers program headed into its final lap on Monday.

Over the weekend, car dealers across the country watched their lots grow empty as crowds rushed to trade in gas guzzlers after the government said that the $3 billion rebate program would end at 8 p.m. EDT Monday, two weeks earlier than expected.

Though the sales are coming to an end, auto dealers will get more time to submit their deals to the government for repayment after the Department of Transportation extended the deadline for filing claims.

Dealers will now have until noon Tuesday to file the paperwork they need to get repaid for the Cash for Clunkers credits of up to $4,500.

The Transportation Department says the extension is due to an overwhelming demand on the computer system set up to handle the claims. The Web site was shut down temporarily Monday afternoon because of the overload.

"Once the program ends at 8 o'clock there will be 700,000 to 800,000 cars that have been sold, most of them fuel efficient," replacing gas-guzzling cars and trucks, LaHood said.

Transportation officials said through early Monday, dealers had submitted 625,000 vouchers totaling $2.58 billion and expected to work up to the deadline to submit the proper paperwork. (See below for a list of top sellers, trade-ins.)

Adding to the urgency, some dealers said they would stop Cash for Clunkers sales even earlier to make sure the government reimbursed them for the rebates - or because they didn't have enough eligible cars left.

"We thought about it a couple weeks ago," said Annette Palmer, 51, at Town and Country Honda in Berlin, Vt., on Saturday with her husband. They hoped to trade in a 1999 Jeep Grand Cherokee for a Honda CR-V.

"We kind of dragged our feet. Then we heard it was closing and we picked up our feet and ran," she said.

Though short of some new models, such as the Ford Focus, Honda Civic, Toyota Corolla and Nissan Altima, many dealers were still selling as many cars as they could before Monday night's deadline.

Standing outside one of his Hyundai dealerships in Appleton, Wis., John Bergstrom said customers traded in 100 clunkers throughout his fleet of 20 dealerships on Saturday and 100 the day before. They were his two biggest sales days during the clunkers program.

"That's about as good as it gets," Bergstrom said. "It's going out with a bang."

In all, Bergstrom said his dealerships - whose brands include Ford, GM and Toyota - sold 800 cars during the program, boosting sales 30 percent. He had to bring in extra staff to deal with the paperwork, but the sales were worth the hassle, Bergstrom said.

Cash for Clunkers has been wildly successful in spurring new-car sales and getting gas-guzzling models off the road, though some energy experts have said the pollution reduction is too small to be cost-effective. Customers receive rebates of between $3,500 and $4,500, depending on the improvement in fuel efficiency from their old vehicle to their new one. As of early Friday, nearly half a million cars had been sold through the program.

But the new sales left many dealers worried about not being reimbursed by the government. As of Friday, dealers had been reimbursed for just a small fraction of the billions in sales.

Some dealers chose to stop participating over the weekend so they could have enough time to process and file the paperwork, including AutoNation Inc., the nation's largest auto dealership chain.

Martin Main Line Honda in the Philadelphia suburb of Ardmore stopped its Cash for Clunkers sales at noon on Saturday. But by late afternoon there were still groups of people wandering the lot.

General sales manager Michael Freeman said the program had been "overwhelming," with 115 clunker sales and big surges in customer traffic at the start and now at the end. He's aiming to get the final stack of paperwork filed before Monday's deadline.

"I have people upstairs, that's all they're doing - paperwork," he said. "The backlog is a nightmare, and it's starting to be a nightmare at the end."

Top Sellers under the Cash for Clunkers program: