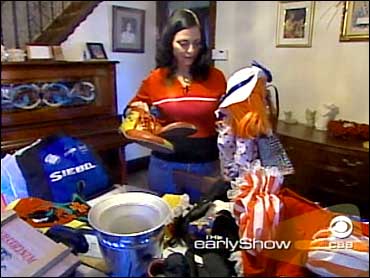 Do you have a jam-packed, messy house and nowhere to put all your things? If so, you're not alone. Lots of Americans have a serious problem with clutter. But, as Cynthia Bowers reports, there is help to be had if you want to get organized.

After years of trying to hold it together, Linda Eck realized she was at the end of her rope. The devoted wife of a firefighter, mother of seven, and owner of an entertainment business called Eckcellent Entertainment, she had a house that looked like a cyclone hit it.

showed
CBS News correspondent Cynthia Bowers an area she calls "the dungeon," loaded with clothes and other items belonging to her daughter.

Eck's home was an "out of control mess," Bowers says, "not so much dirty as drowning in stuff." Clutter from her kids, props from her business and memorabilia from her family's past.

"My son is a sophomore and his name is on a third-grade book. Now, why is that still on the shelf?" Eck says.

To help her get her house in order, Eck turned to Jane Carroo, a clutter coach. Yes, Bowers confirms, there is such a thing.

Jane Carroo, of the Clutter Coach Company, is one of a growing number of professionals who help the unorganized deal with the typical, and atypical, messes in life, Bowers explains. Their number has tripled over the past three years.

The cost of a clutter coach varies, but they typically charge $50 an hour.

With Eck's input, Carroo and her team of organizers tackled the worst of it: three rooms in the basement.

"We sketched the rooms out," Carroo says, "and decide where you need furniture and where you maybe want to remove furniture."

They cleared the space, getting rid of anything old, broken or unused, sorting and labeling the rest, and creating better systems for the stuff that stayed, until there was a place for everything, and everything was in its place.

"My scarves were literally just — I'd keep trying to fold them up in a drawer," Eck recalls.

Now, her drawers even have labels on them.

But Carroo adds, "Not too much got purged out of this project."

Experts say it's no surprise an increasing number of messy Americans are leaving it to the pros to get their lives in order.

"When you try to clean your own house," points out Jim O'Connor of the National Association of Professional Organizers, "the kids start calling you, the phone starts ringing, you've got other things to do. But this is our job. And we work fast, because we know what needs to be done, we know the procedures, so it's very helpful to have an objective third party, a fresh set of eyes."

Carroo says, if Eck "can really maintain (the new look with only) 15 minutes a day. Before she goes to bed at night, she can just zip through and it'll stay (organized and neat)."

But, Bowers says, Eck is still allowed to have a junk drawer.

"Of course," Carroo says. "Everyone's allowed to have a junk drawer!"

The organized rooms got rave reviews from Eck's harshest critics, her kids.

And because she was part of the process, Eck expects to stay organized, saying, "I told my kids, to break a habit, it usually takes 21 days. For 21 days, I'm going to be regimented, and we're keeping a new routine."

But, Bowers notes, that remains to be seen.

When she asked the kids how long they could keep the house neat, one of Eck's sons quickly responded, "Ten seconds."

How can you make your home a clutter-free zone?