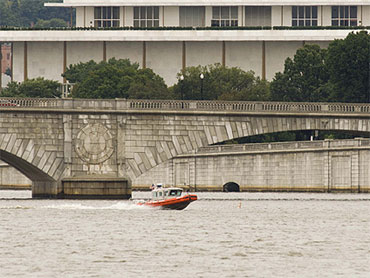 (AP Photo/Kevin Wolf)
CNN has responded to critics of its decision this morning to report that the Coast Guard had fired 10 rounds at a suspicious boat in the Potomac River.

It later became clear that CNN had based the report on a radio transmission of a training exercise, and that no shots had ever been fired.

CNN said in its statement that staffers had been monitoring law enforcement activity when it heard a Coast Guard transmission that a boat had breached a security zone on the Potomac, near the Pentagon.

The network said the staffers contacted a Coast Guard spokeswoman, who "said she was unaware of any activity taking place on the Potomac River."

"After hearing a further radio transmission about 10 rounds being expended, and after reviewing video of rapid movement by Coast Guard vessels as the President's motorcade crossed the Memorial Bridge, CNN reported the story," the network said. "Simultaneously, during a second phone call, the Coast Guard spokeswoman informed us that its National Command Center and other command posts knew nothing about any activity in the area."

CNN went on to say that not reporting the story would have been "irresponsible."

"Given the circumstances, it would have been irresponsible not to report on what we were hearing and seeing," the statement said. "As with any breaking news story, information is often fluid and CNN updated the story with the official explanation from the Coast Guard as soon as it was provided."

White House press secretary Robert Gibbs this morning took a shot at CNN's decision to report the story, saying, "before reporting things, checking would be good."

The network also provided a transcript of the radio transmission that it heard. Check it out below:

:50 you're in a coast guard security zone

2:00 If you don't slow down and stop your vessel, and leave our zone you will be fired upon.

2:35 we have expended ten rounds, the vessel is operating at stern. we're going to reassess the situation.

3:20 this is the coast guard, have everyone go to the stern, place your engine in neutral