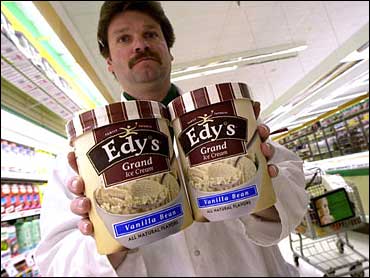 The half-gallon ice cream container — the sweet standard of grocery store freezers for decades — is starting to shrink.

While manufacturers over the years reduced the package size of everything from candy bars to dish detergent, the traditional ice cream "brick" remained what it was — the half-gallon.

Now, pinched by rising ingredient costs and afraid to raise prices that are already above $5, at least two ice cream makers have started silently replacing the half gallon with a 1.75-quart carton, a half-pint smaller.

Schwan's, which sells primarily via a 7,000-vehicle fleet of home delivery trucks, made the switch in 2001.

Dreyer's, which is based in Oakland, Calif., and sells the Dreyer's and Edy's brands, began introducing the smaller package in March. The new and old cartons can be found side-by-side during the transition, identical in shape and design — and price. But one has two quarts, the other 1-3/4 quarts.

"We have over 100 flavors and many of them — because people are preferring indulgent, chunky flavors — cost more to produce than regular flavors like vanilla," said Dreyer's spokeswoman Dori Bailey. "We'd like to keep the cost at a price that's more affordable for folks."

But according to the International Dairy Foods Association, vanilla remains the most popular flavor of ice cream. However, chunks and chips have worked their way into the Top 10 flavors, with butter pecan at number three, chocolate chip at six, cookies and cream ranked eight and praline pecan in the nine spot.

Other major ice cream makers in the United States' $10 billion ice cream industry, including Good Humor-Breyer's and Turkey Hill, are sticking with the half-gallon for now. About three quarters of all ice cream is sold by the half-gallon, according to the International Ice Cream Association.

Some customers are noticing the change and don't appreciate it.

"Everybody's doing it," complained Dorothy McGrath, 73, as she shopped the ice cream aisle at a Super Fresh supermarket in Egg Harbor Township. "The same thing happened with laundry detergent. The brands I used to buy in 100-ounce bottles are now 80 ounces, only the price is the same. They're cheating the public, because they don't advertise it."

Manufacturers have heard such complaints, but sales haven't been significantly affected, they say.

"We've had a few people say, `Wait a minute, there's less ice cream in this package,'" said John Nabholz, spokesman for Schwan's Sales Enterprises of Marshall, Minn. "But our research shows there's effectively the same yield. It's a more user-friendly package and it's more efficient."

The lidded containers eliminate the messy problem of half-gallon bricks that frequently were opened at both ends, and reduce "knuckle muck," which is the ice cream that gets on your hands from the box flaps as you dig your spoon deep into the box, he said.