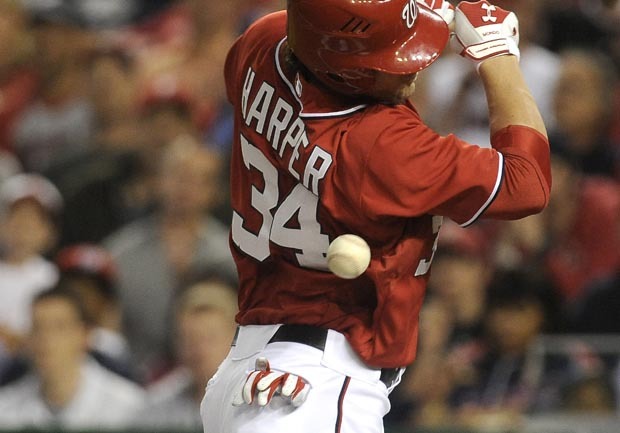 "I was trying to hit him," the Philadelphia lefty said. "I'm not going to deny it."

That startling bit of honesty came after Hamels nailed the Washington teen with a fastball in the small of the back his first time up during the Phillies' 9-3 win Sunday night. The candid remark is also certain to cost Hamels a suspension from Major League Baseball.

Harper came up with two outs in the first inning and Hamels promptly drilled the 19-year-old.

"That's something I grew up watching, that's kind of what happened. So I'm just trying to continue the old baseball because I think some people are kind of getting away from it. I remember when I was a rookie the strike zone was really, really small and you didn't say anything because that's the way baseball is," Hamels said.

"But I think unfortunately the league's protecting certain players and making it not that old-school, prestigious way of baseball," he said.

In other words, Hamels said, "It's just, 'Welcome to the big leagues."'

Harper quickly evened the score with Hamels. After taking third on a single, Harper broke for the plate when Hamels made a pickoff throw to first. Harper stole home, sliding in safely for the first swipe of his eight-game big league career.

"I think he kind of did that for me," Hamels said.

Harper brushed off Hamels' comments on the purpose pitch, according to Washington Post writer Adam Kilgore:

In the third inning, Washington starter Jordan Zimmermann hit Hamels in the left leg with one out and a runner on first when the Phillies pitcher squared to bunt. Home plate umpire Andy Fletcher warned both dugouts.