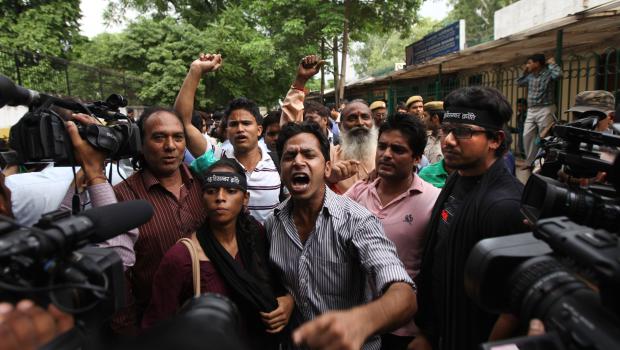 Electrified sandals and bras, and jeans that with an "SOS" button are the among the rape deterrent garments unveiled by college students in India, reports the India Today web site.

This week, two innovative designs - sandals that deliver electric shocks and jeans that have an inbuilt SOS button - were unveiled by students in Uttar Pradesh, a state in India.

As India Today reports, Computer Science students Rijul Pandey and Shalini Yadav at a private engineering college in Varanasi designed sandals that would give an electric shock to any molester. They would also send an instant SOS message to those specified from the wearer's list of mobile contacts.

Two other students at the same institute, Diksha Pathak and Anjali Srivastava, developed an electronic GPS device that could be sewn into a pair of jeans. The kin of the victim would be immediately informed of any molestation attempt by a preset text alert. Both devices are linked to the GPS system through which the location of the victim can be pinpointed.

In Chandigarh, another student has developed an electrified bra that would give an assailant a shock and a burn. Manisha Mohan, who is studying at SRM University in Chennai, came up with the antirape lingerie with two fellow students as a reaction to the brutal gang-rape of a 23-year-old woman in Delhi in December 2012.

The high-voltage undergarment is fitted with a pressure sensor connected to an electric circuit. The bra, named SHE (Society Harnessing Equipment), can also send a text message with the victim's GPS coordinates to a relative or friend and the local police station, Manisha told India Today.

India has been under scrutiny for the number of attacks on women there, including the brutal gang rape of a woman on Dec. 16, 2012. That woman died of injuries after being attacked after boarding a public bus. The attackers raped the woman and beat her male friend, inflicting massive internal injuries with a metal bar, police said. The victims were dumped naked on the roadside, and the woman died two weeks later in a Singapore hospital.