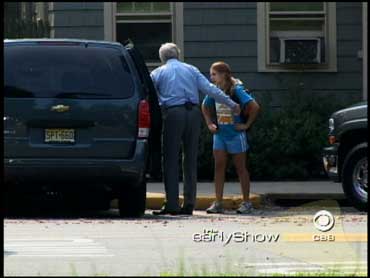 Parents teach their small children not to get into cars with strangers, but most kids abducted by strangers are teenagers.

The Early Show consumer correspondent Susan Koeppen set up a hidden camera experiment near two college campuses: the Ivy League's Princeton and John Jay College, where students study criminal justice. She found that many of the students made unsafe decisions.

A Princeton, Ken Wooden, a child safety expert, pretended to be a modeling agent looking for young faces to star in a commercial. He told students that they needed to get in his van for their screen test "for sound purposes."

One male and one female student got right into the van, even though both said they felt strange about it.

Wooden has spent years interviewing criminals about the tactics they used to lure victims. He said another common strategy is to pose as a police officer. He lured students to his van to look at surveillance video. He was not wearing a uniform or driving a police car, but two teens got right in. Two girls balked at getting inside, but Wooden said she was still in danger.

"A little lady like that with someone who is crazy enough with the adrenaline, she would have been goner," he said.

But Wooden says the easiest lure is when the predator pretends to need assistance. In this case, Wooden wore a sling and asked for help loading boxes into his van. Student after student falls for the trap. It was a strategy used by serial killer Ted Bundy.

"He didn't appear threatening, so I didn't have a problem helping him," one girl said.

"They look out for a monster-type person, not someone with a good story, not someone who has the art of deception down to perfection," Wooden said.

Students in New York City's John Jay College of Criminal Justice proved to be just as ill prepared as those at Princeton.

Wooden pretended to be lost. He offered students cash if they get in his van and help him drive downtown.

Enticed by the money, several kids hopped into the van and drove off with a complete stranger. Another student also falls for the lure. When CBS News stopped the van around the corner, the boy admitted the offer of quick cash clouded his judgment.

Many students told us they were uneasy about getting in the van, but were ready to fight back if Wooden tried something. But Wooden said they didn't have a chance if he had been a real kidnapper.

"What is a kid going to do who's caught by surprise, who's paralyzed by fear, and there's a knife at the throat?" he said.

It would have been easy to abduct any of these kids if they were tied up. For his next lure, Wooden told a student that if he gets in the van, he'll be a part of a reality show. The catch is that his hands need to be duct-taped together. He lets Wooden do it.

Wooden said doing that is a death sentence.

"It put a cold, cold chill down my spine, because I know kids who have been found dead with duct tape," he said. "He was goner. A goner."

In all, Koeppen said about one in four teens fell for the trap. Almost every student who fell for our con said they felt weird about the situation or they were scared to get into the van but they did it anyway. Parents should tell their children to listen to their instincts and to be aware of the common tricks predators use, such as the ones Wooden demonstrated.

For more information about predator lures and how to educate your children, log onto Child Lures Prevention.