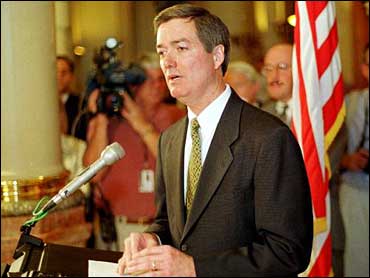 Colorado Gov. Bill Owens apologized for saying "the natives are getting restless" during a conference on Native American tribal gambling.

Owens made the remark at the Western Governors' Association Summit after a participant's microphone wouldn't work and he urged it be fixed quickly. Some attendees told the Rocky Mountain News the audience fell silent, then groaned and chuckled.

"It was an inadvertent comment that the governor regrets," Owens' spokesman Dan Hopkins said Thursday. "He apologizes to anyone who was offended."

Sheila Morago of the Arizona Indian Gaming Association said Owens laughed when he said it and so did the people with her.

"I don't think he meant it in any derogatory way at all," she said.

Richard Milanovich of the Agua Caliente Band of Cahuilla Indians in Palm Springs, California, said he "couldn't imagine" any person of stature making that kind of remark.

Owens "went out of his way to call this conference, and then more or less made fun of the people who were there," Milanovich said.