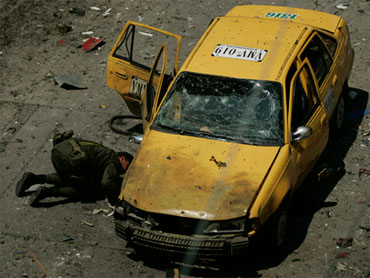 A car bomb ripped open cars and storefronts in the administrative center of Colombia's Pacific port of Buenaventura on Wednesday, killing six people and wounding more than 30, authorities said.

The blast occurred about 9:30 a.m. near offices of the mayor and prosecutors, with six employees of the latter institution among the injured, said Jose de la Pava, the chief provincial prosecutor.

Buenaventura is a key cocaine trafficking hub as the country's only major Pacific port and is rife with rival criminal bands.

There was no claim of responsibility and President Alvaro Uribe said it was too early to lay blame, as police had not yet even announced the type of explosive used.

Uribe announced a reward of up to $150,000 for information leading to those responsible.

"We can't let our guard down," he told reporters in Medellin before heading for Buenaventura.

The armed forces chief, Gen. Freddy Padilla, said he suspected Colombia's main leftist rebel group. Chief Prosecutor Guillermo Mendoza said he would not rule out retaliation against his office by drug traffickers - or a fight between rival bands.

"It seems it was a car that was abandoned during the night," said Valle del Cauca provincial Gov. Juan Carlos Abadia, who gave the death toll of six killed and 32 injured.

That number held late Wednesday, according to a local police commander and Abadia's security chief.

Uribe, who leaves office in August, has put the rebels of the Revolutionary Armed Forces of Colombia on the defensive since taking office in 2002. But the group known as the FARC remains capable of damaging attacks and in recent months it has stepped up raids on military posts in Valle del Cauca in particular.

Authorities say it is involved in the cocaine and marijuana trade in the region. So are far-right paramilitaries, which Uribe's critics say only feigned demobilization and continue to wreak havoc and corrupt local politics.

Wednesday's car-bombing was the most serious in Colombia since a September 2008 blast killed four people in front of the palace of justice in Cali, capital of Valle de Cauca province. Authorities blamed the FARC for that attack.