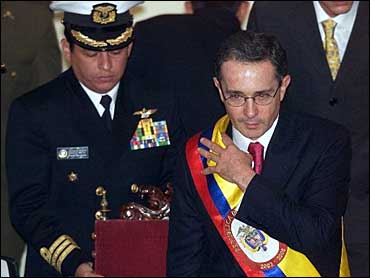 Five days after taking office amid a rebel mortar attack, President Alvaro Uribe authorized the government Monday to take special measures to crush the insurgents, including imposing a war tax to finance the buildup of Colombia's army and police forces.

The hardline Uribe wasted no time carrying out campaign pledges to get tough on rebels waging war for the past 38 years and to put South America's most violence-plagued nation in order.

After meeting with his Cabinet into the early morning hours, Uribe invoked a "state of internal commotion," which empowers him under the Constitution to take special measures when there is a threat to "institutional stability, state security or citizen well-being."

To pay for that, a 1.2 percent tax will be imposed on people and companies with assets over $60,000. It is expected to raise $800 million, Finance Minister Roberto Junguito said.

Washington, which provides military aid to Colombia, had asked Colombia to dig deeper into its own pockets in the war effort.

The government was expected to announce other measures under the decree during the week. Under the state of commotion, the government can restrict citizen movement, detain suspects before obtaining warrants and put limits on the media.

"The state and Colombian society must start working toward recuperating national security now that the violent ones are becoming more aggressive and destructive," Interior and Justice Minister Fernando Londono said.

However, there are no plans to limit the freedom of the press, Londono said.

The internal commotion decree is stronger than a state of emergency, which is enacted during natural or economic disasters. The new decree is effective for 90 days, then can be reactivated for two more periods of 90 days each, the second of which must be authorized by Congress.

Some observers — including Daniel Garcia-Pena, director of the Planeta Paz peace group — worried the government could use the decree to jeopardize individual freedoms.

But Sen. Guillermo Velez said the decree was justified because "there is no country in the world that has as many, and as cruel, terrorist attacks."

He added, however, that the tax was high and could aggravate Colombia's economic troubles. Urban unemployment is at 17.5 percent and the peso's value fell 12 percent starting in June.

Colombians handed the 50-year-old Uribe a landslide victory in May elections after he pledged to crack down on rebels and an outlaw paramilitary group.

About 3,500 people die every year in the war that pits rebels against the government and illegal paramilitaries. Colombia currently has 200,000 police and soldiers, while the rebels and paramilitaries have an estimated 30,000 members.

"The more power he has, the better," said Nelson Rivera, a 28-year-old unemployed laborer feeding pigeons on Bogota's broad main plaza. "We are all just hoping he can solve some of our problems."

Uribe, a former state governor and mayor of his native Medellin, also plans to create a million-strong civilian force of "supporters" to help inform police and the army of rebel and paramilitary activities.

Colombians were outraged after Wednesday's mortar attack on downtown Bogota killed 19 civilians during Uribe's inauguration. The attack and numerous bombings around the same time have been blamed on the leftist Revolutionary Armed Forces of Colombia, or FARC, Colombia's largest rebel group.

Uribe said he was not cowed and he would try to bring the attackers to justice.

"It is an obligation to capture those responsible for the attack," Uribe told the newsmagazine Semana. "We have to tell them that there is a state here, and that we will confront them."