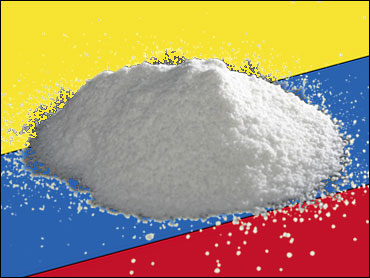 A reputed drug lord on the FBI's top 10 most-wanted list was captured in western Colombia, the interior minister said Monday, in a major blow to the country's largest remaining drug cartel.

Diego Montoya, who sits alongside Osama Bin Laden as the only major alleged drug trafficker on the FBI list, is accused of leading the Norte del Valle cartel and exporting tons of cocaine to the United States. The FBI had offered a reward of $5 million for information leading to his arrest.

The FBI says Montoya is sought "in connection with the manufacture and distribution of multiple tons of cocaine." It said the cartel is aided by left-wing rebels as well as right-wing paramilitaries.

The Norte del Valle cartel became Colombia's most powerful after the dismantling of the Medellin and Cali cartels in the 1980s and early 90s. Officials believe it is responsible for as much as 30 percent of the more than 550 tons of Colombian cocaine smuggled each year to the United States.

To protect its valuable drug routes, the cartel is believed to have worked closely with right-wing death squads whose umbrella organization, the United Self-Defense Forces of Colombia, is listed as a terrorist organization by Washington.

Authorities have been closing in on the cartel since last year, when the army killed eight members of a private army believed to be protecting Diego Montoya.

A 2006 gunfight outside the Mi Casita psychiatric hospital left 11 Colombian police officers dead, and the police may have been acting on a tip that Montoya was hiding in the home, posing as a patient. There have been charges it was an ambush.

The Christian Science Monitor reports Montoya likes fast cars. Police in 2005 seized his personal mini racetrack last year, along with 74 ranches and eight houses. He is described as heavyset and gruff, and likes to be called "El Señor de la Guerra (War)."

Since taking office in 2002, President Alvaro Uribe, a key U.S. ally in Latin America, has approved the extradition of nearly 500 Colombians to the United States, the majority on drug-trafficking charges. For his aggressive stance, the United States has awarded Colombia with more than $700 million in annual anti-narcotic aid.

Most of those extradited have been low or midlevel drug traffickers. High-profile extraditions have included Gilberto and Miguel Rodriguez Orejuela, brothers who helped found the Cali cartel.

Colombia is the source of 90 percent of the cocaine entering the United States. Supply has remained robust despite record extraditions and eradication of coca crops.