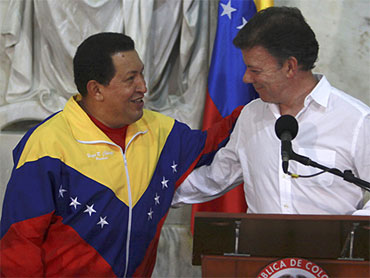 The leaders of Colombia and Venezuela have re-established diplomatic relations, saying they are starting to repair confidence undermined by years of recriminations between the two countries.

The announcement came after a four-hour meeting Tuesday between Venezuelan President Hugo Chavez and Colombia's new leader, Juan Manuel Santos, restoring ties that Chavez severed last month in response to accusations that Venezuela has become a haven for Colombian rebels.

Santos said the rapprochement between two men with "so many and such frequent differences, who decide to turn the page and think of the future ... that's something I think we have to celebrate."

Santos told reporters after the meeting that Chavez had given assurances "he is not going to allow the presence of outlaw groups in his territory."

Chavez said the neighboring countries are starting down a new road after years of often prickly relations under Santos' predecessor, Alvaro Uribe. Uribe's administration accused Chavez's socialist-oriented government of aiding the rebels and turning a blind eye to rebel leaders and guerrilla camps in Venezuelan territory.

Chavez reiterated that he doesn't support the Colombian rebels or any other insurgent group.

"I've said it a million times: The Venezuelan government that I lead neither supports nor allows, nor will permit, the presence of guerrillas, or terrorism or drug trafficking," Chavez said.

"I need the president to believe in me," Chavez said. "Believe me ... we haven't found a single guerrilla camp," he added.

The two presidents said they will appoint ambassadors as soon as possible and will work to rebuild trade that has fallen dramatically in the past year.

They also said Colombian Foreign Minister Maria Angela Holguin will travel to Caracas soon to work on creating multiple joint commissions, including one to oversee security along the Colombian-Venezuelan border.

The latest flare-up came July 22 when Chavez broke off diplomatic ties after Uribe's government publicly presented photos, videos and maps of what it said were Colombian rebel camps inside Venezuela. Chavez accused Uribe of trying to stir up a war in his final days in office.

Santos, a U.S.-educated economist who was elected in a landslide and sworn in Saturday, was previously Uribe's defense minister. There has been friction between Santos and Chavez in the past.

But after the talks in Santa Marta on Colombia's Caribbean coast, Santos said they aim to look forward from this point on. "We're starting from zero."

Santos has promised to continue Uribe's hard line against Colombia's rebels — the Revolutionary Armed Forces of Colombia and the smaller National Liberation Army — while also being open to dialogue.

He is moving to repair frayed ties with Ecuador as well as Venezuela.

In a joint statement laying out principles for cooperation, Chavez and Santos agreed to seek "transparent, direct, respectful dialogue."

The two leaders also agreed to boost cooperation between their foreign ministers to jointly come up with a strategy to deal with the situation along the border — ranging from economic problems to security — and prevent the presence of illegal armed groups such as rebels or paramilitary fighters along the border.

The five joint commissions they agreed to create are to focus on issues including security, trade and payment of debts, plans for social spending along the border, and other areas including joint work on infrastructure projects.

The commission dealing with debt is to address a request for payment by Colombian exporters who say they are owed about $700 million for products sold to Venezuelan companies. Venezuela maintains strict controls on foreign currency trading, and a government agency provides dollars to businesses at official exchange rates to import approved goods.

Trade between the countries fell sharply in the past year after Chavez froze relations with Uribe's government to protest Colombia's decision to grant the U.S. military expanded access to its military bases.

Chavez and Santos met at a colonial-era estate where 19th century independence hero Simon Bolivar died. Chavez, who views Bolivar as the inspiration of his socialist movement, said it was appropriate to be making amends at a place he considers sacred.

Chavez expressed optimism they would begin to "rebuild what was broken to pieces."