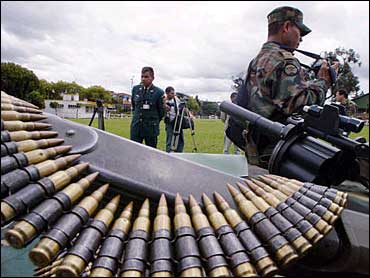 The right-wing fighters also agreed to start demobilizing their forces by the end of the year, according to a statement posted on the president's office Web site and signed by paramilitary leaders and members of a government peace commission.

"The exploratory phase of the peace process has ended, to give way to a new stage of negotiation," the statement said.

The AUC rose in the 1980s to counter rebel extortion and kidnappings in rural areas where government troops had little or no control.

Leaders of the United Self-Defense Forces of Colombia — an umbrella paramilitary group accused of some of the worst human rights abuses in Colombia's 39-year civil war — said they wanted to take the appropriate steps to help build the "authentic peace that the Colombian nation waits for and deserves."

The group agreed to maintain a cease-fire declared last December, and to stop trafficking drugs.

For its part, the state promised to help the demobilized paramilitary fighters reintegrate into regular society.

The statement did not address the issue of legal action against top paramilitary leaders, some of whom face extradition requests from the United States on drug charges.

Earlier this month, Castano urged the United States to suspend the extradition orders and give the leaders a chance to prove they can behave like regular citizens.

The AUC is one of three illegal Colombian groups on the U.S. State Department's list of terrorists.