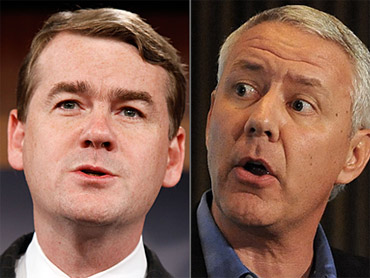 CBS News is now projecting that Democrat Michael Bennet will win the Colorado Senate race over Tea Party-backed Republican Ken Buck in what was an extremely close contest.

The Associated Press, Fox News and the Denver Post projected the race for Bennet earlier today. CBS News declined to make such a call until now because of outstanding ballots and the possibility of a recount.

Bennet claimed victory this morning, thanking "the thousands of Coloradans who made this victory possible, who gave so much to our campaign, knocking on doors, making calls, and working tirelessly to ensure we leave more opportunity to the next generation."

"Yesterday, Colorado chose to move our state and this country forward. I will do everything I can to live up to the confidence you have placed in me," he said. Bennet was appointed to the seat to replace Secretary of the Interior Ken Salazar.

Buck conceded and called Bennet to congratulate him this afternoon. His campaign said Buck told Bennet that "while the final margin in the race is very small, Colorado voters have spoken and he wishes Senator Bennet well."

Buck's apparent loss is a blow for the Tea Party movement, which on the Senate side had a rough night last night. There are now three Tea Party-backed candidates - Buck, Nevada's Sharron Angle and Delaware's Christine O'Donnell - who lost in seats that Republicans might plausible have won with stronger candidates.

Democrats are now projected to control at least 52 seats in the new Congress. Two races remain outstanding: Washington, where Democrat Patty Murray holds a slim lead with many precincts yet to report, and Alaska, where the results might not be known for weeks.