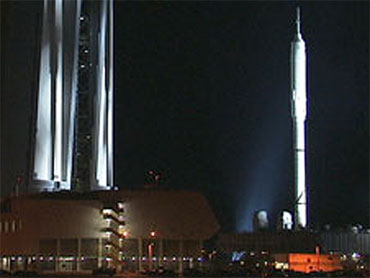 With the only hard evidence consisting of debris that was seared by blowtorch heat as it fell to Earth, experts said Monday that NASA may never know for sure what caused Columbia to disintegrate over Texas — an unsettling thought so early in the investigation.

"I don't think they're going to get a lot of information from the debris. Chances are it's going to be very badly burned and damaged," said Jerry Grey, director of science and technology policy for the American Institute of Aeronautics and Astronautics. "We may just have to draw logical probability conclusions as to what happened. That's my guess as to what we'll end up doing."

Indeed, four days after finding a section of wing with some thermal protection panel still attached, NASA said it had yet to conclude whether it was from the right or left side. That is crucial, given that all the trouble apparently began in the left wing during the final minutes of Columbia's flight.

Many of the identifying numbers on the wing fragment were burned off, said NASA spokeswoman Catherine Watson. Columbia was enduring the peak 3,000-degree heat of atmospheric re-entry when it broke apart 40 miles over Texas while traveling at 18 times the speed of sound.

NASA also has found the cover of one of the two landing gear compartments, another potentially critical piece because the temperature surged inside the left wheel well and was the first sign of trouble. But again, officials do not yet know whether it is from the right or left side.

"Even if they identify a tile or a segment that had been burned," Grey said, "was it burned on the way down or was it burned before?"

The independent board appointed to investigate the Feb. 1 catastrophe held a series of meetings Monday in an office near Johnson Space Center, as its pace picked up. The chairman, Harold Gehman Jr. — a retired admiral who investigated the 2000 bombing of the USS Cole — said two to three teams of experts would analyze all the pictures and video taken of Columbia as it flew over California, Arizona, New Mexico and, finally, Texas.

One photo, by a high-resolution military telescope a minute or two before Columbia broke up, is drawing special interest. A dark gray streak can be seen trailing the left wing, and the leading edge of that wing appears to be jagged.

NASA officials on Friday said the image was too distorted to draw any such conclusions. But on Monday, many experts, including Purdue University's Steven Schneider, wondered whether the Air Force's Starfire telescope captured other more telling images that are being kept secret for national security reasons.

The telescope can recognize features as small as one foot in length on a satellite 600 miles away, according to the Air Force.

Last week on the Senate floor, Virginia Republican George Allen quoted from what he said was an e-mail from astronaut David Brown to his brother, expressing concern about the shuttle's left wing and promising to send pictures. Allen clarified his remarks over the weekend, but now NASA has released a statement from Douglas Brown, reports CBS News Correspondent Peter King

"Dave sent several personal emails during the mission, but at no time did he write about any concerns with damage to the left wing of the orbiter or any other safety issues," said the statement.

"As they reached orbit, Dave took his planned photos of the external tank separation, which is standard procedure," said Brown. "These are the photos I discussed with Senator Allen."

Retrieved shuttle debris is going to be harder to decipher than airplane wreckage, Schneider said.

"This thing flies 10 times faster and 10 times higher than an airplane, so we have almost no previous experience with interpreting debris from accidents like this, as opposed to 50 years with transonic planes," he said.

"Ilan was the son of a Holocaust survivor, and an outstanding pilot and a war hero," Sharon said. "He showed Israel at its best to the world."