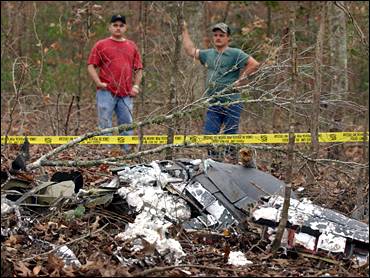 A 1990 preliminary report to NASA warned that debris could damage protective tiles and endanger the space shuttle — echoing the leading theory for what caused the loss of Columbia and its seven-member crew.

That theory is gaining support from what witnesses to the disaster saw and what investigators are finding on the ground.

At about the same time, Cal Tech astronomer Anthony Beasley also saw something fly off the spacecraft.

"At one point there was a particularly bright light as things were beginning to separate from the shuttle and fall back and join the trail," said Beasley.

Recovery teams in Arizona have found what they believe to be pieces of the shuttle; that and the new pictures bolster data monitored during the final minutes of flight that revealed a cascading series of failures as Columbia raced for home.

Sensors in the left wheel well showed a spike in temperatures, as did a sensor on the fuselage above the left wing. Perhaps more importantly, the shuttle started pulling to the left, ultimately to the point where its flight control computers could no longer compensate.

NASA engineers don't yet understand what caused this unusual "drag" on the left side. But it's possible that damage to the insulating tiles that protect the shuttle on its fiery reentry could have significantly disrupted the airflow under the left wing; that could have created such an extreme "yaw" or skid to the left that the spacecraft was ultimately ripped apart.

The tiles may have been damaged when a patch of foam insulation broke off from the shuttle's external fuel tank during launch and struck tiles on the underside of the left wing. NASA suspects that may have caused some "localized damage" to the heat tiles, but shouldn't have put the spacecraft and its astronauts in danger.

Similar incidents did not lead to tragedy. Last June, insulation was shed from the fuel tank during the launch of Endeavour.

Five years ago, more than 300 of Columbia's tiles were peppered with damage by bits of insulation. A NASA report written after that 1997 incident concluded "the extent of damage at the conclusion of this mission was not normal."

The 1990 study led by Paul Fischbeck, an engineering professor at Carnegie Mellon University, conducted a risk analysis of the shuttle's thermal protection tile system and found that the spacecraft was highly vulnerable to tiles being knocked off or broken by insulation falling from the fuel tank and from other debris.

Fischbeck said Tuesday that NASA engineers "took a lot of our advice to heart" and made changes to lower the risk of debris hitting the tiles during launch. But the problems were never completely solved, he said.

In a follow up to the report, Fischbeck found that the most vulnerable parts of the shuttle were the undersides of the wings close to the fuselage and right under the crew compartment.

While the prime focus remains on the tiles, a number of other possible causes are being explored. CBS News Correspondent Barry Bagnato reports a top NASA official tells the Los Angeles Times investigators are considering whether the shuttle was struck during orbit by some piece of space junk.

The hunt for answers is now focusing on data from the last 32 seconds before Columbia broke into pieces over Texas. The data — which was stored in computers at a space communication center in White Sands, N.M. — is faint and ragged, but if it can be pieced together, it could answer key questions about the mission's last moments.

Meanwhile, NASA sent a team to California to inspect material that may be part of the shuttle's wing, while searchers scouring an eastern Texas pond discovered what is believed to be a wing fragment.

Michael Kostelnik, a NASA spaceflight office deputy, cautioned that the space agency has not determined whether the material found in California is from Columbia's wing — or even from the shuttle at all.

Shuttle fragments and body parts continued to turn up in Texas and Louisiana on Tuesday. A NASA radar map indicates that is the heaviest debris field.

On Tuesday, a 6- to 7-foot section of what authorities believe to be a shuttle wing fragment was recovered from a pond in Texas, Nacogdoches County Sheriff Thomas Kerss said.

More than 12,000 recovered remnants, many nickel-sized, have created a growing mosaic of evidence that could take months or years to pick through.

CBS News Correspondent Robert Berger reports NASA has informed Israel that the remains of Israeli astronaut Ilan Ramon have been found and identified. The army says the remains will be brought to Israel in the coming days, and the funeral will be held next week. Israeli officials say the finding of the remains is a relief to the family, because under Jewish Law, a funeral cannot be held unless the body is found.