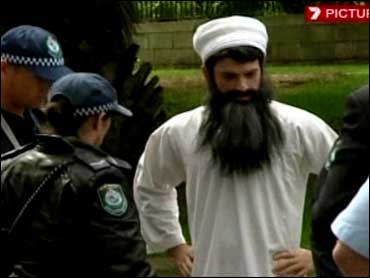 Members of an Australian TV comedy show, one dressed as Osama bin Laden, drove through two security checkpoints Thursday before being stopped near the Sydney hotel where President Bush is staying during a summit of leaders from Pacific Rim countries.

The stunt embarrassed Sydney police who have imposed the tightest security measures in city history for this year's Asia-Pacific Economic Cooperation (APEC).

Bush spokeswoman Dana Perino had few details on the incident, but Australian press reported that 11 members of the comedy troupe "The Chaser's War on Everything" had been charged with entering a restricted area.

The group staged a faux motorcade, pretending to be the delegation of Canada with one of the comedians dressed as bin Laden, and made it past two police checkpoints before being stopped, reported The Hill.

Cast members hired two motorcycles and three large cars on which they put Canadian flags. Police waved the motorcade through two checkpoints before pulling it over near the Intercontinental Hotel where Mr. Bush is staying.

Cast member Chas Licciardello got out of the car dressed in a white tunic and cap and wearing a long fake Osama bin Laden-style beard.

"No particular reason we chose Canada," cast member Chris Taylor was quoted as saying on the Sydney Morning Herald Web site. "We just thought they'd be a country who the cops wouldn't scrutinize too closely, and who feasibly would only have three cars in their motorcade - as opposed to the 20 or so gas guzzlers that Bush has brought with him."

Mr. Bush is a frequent target of "the Chaser," as are Australian politicians. Foreign Minister Alexander Downer said the stunt proved security was working.

Mr. Bush had expressed regret that security measures taken to protect the conference had burdened Australians.

"It's unfortunate that security climates were as such, but, as soon as we get out of town, then Sydney will return to normal, hopefully," Perino said.

Mr. Bush also was to push for expanded trade with Pacific Rim nations and appeal for help in getting stalled global trade talks going again. He was laying out his views on the environment, energy security and the economic costs of terrorism in a speech to business leaders from the Asia-Pacific Economic Cooperation forum.

Climate change was high on the agenda of the U.S. and Chinese presidents in a 90-minute meeting and aides said it would be an important aspect of Mr. Bush's speech. The president also was to meet with Russian President Vladimir Putin, among heads of state here for the annual meeting of the 21-nation economic gathering.

Mr. Bush has been criticized by environmentalists and others for his opposition to the 1997 Kyoto treaty against global warming, and China has long been slammed for the huge amounts of greenhouse gases its power plants and industries pump into the atmosphere. The fact that neither China nor India, another major global polluter, was covered by Kyoto was one reason Bush has opposed it.

But both leaders seemed to be generally in agreement on the subject.

"We believe that the issue of climate change bears on the welfare of the whole humanity and sustainable development of the whole world," Hu told reporters after his meeting with Mr. Bush. "And this issue should be appropriately tackled through stronger international cooperation."

Climate control has been designated a top agenda item for this year's APEC meeting.