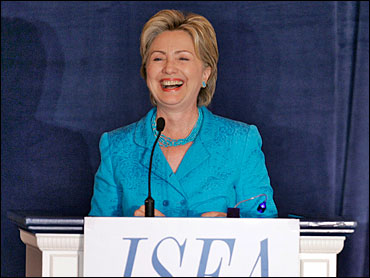 Would the American public accept a woman as commander in chief in times of international crisis?

Challengers for the presidency always face hurdles in convincing voters that they understand foreign policy — a skill they can presumably learn only at the national level. It turns out that you sometimes actually need to be elected president before Americans tell pollsters they think you know how to do part of the job. Does a woman candidate have an even harder challenge?

In a July CBS News/New York Times poll, fewer than half the registered voters interviewed (42 percent) said they had confidence that Hillary Clinton could handle an international crisis. Fifty-two percent said they were "uneasy" about her approach. Men were more likely than women to say they'd be uneasy about Clinton in a crisis. They also were more likely to say that they did not think it was likely that Clinton could be an effective commander in chief.

Could gender be the issue? Not on the surface. As far back as October 1984, when Geraldine Ferraro became the first woman on a major party's ticket (she was Democrat Walter Mondale's vice presidential running mate), 71 percent of registered voters told CBS News and The New York Times that being commander in chief was not something only a man would be capable of doing. In 1994, when Bill Clinton (who had avoided military service during the Vietnam War) was President, 60 percent told NBC and the Wall Street Journal that serving in the military wasn't a requirement to becoming an effective commander in chief.

There are, however, polling examples of women candidates falling behind on the military and the international front. In April 1999, when the U.S. was engaged in military action in the former Yugoslavia, NBC News and the Wall Street Journal asked how much confidence the public would have about prospective presidential candidates serving as commander in chief. More than six in 10 said they had little or no confidence in then-candidate Sen. Elizabeth Dole's ability to do that, whereas only about four in 10 said that about two of her Republican opponents, George W. Bush and John McCain.

In 1984, Ferraro had a different problem. She was a three-term member of the House of Representatives, with limited foreign policy experience. The voters saw that. In September, after her nomination, only 38 percent of voters said they had confidence in Ferraro's ability to handle a crisis.

But Hillary Clinton's current numbers on handling crisis aren't much different from those that any non-president gets from the public. It may be more a matter that nothing convinces the public you can handle foreign crises except on-the-job training.

Here are some examples. Since the early 1980s, CBS News has been asking registered voters to tell us whether they had confidence in a candidate's ability to handle an international crisis, or whether they were uneasy about it — the same question that we asked last month about Hillary Clinton. Uniformly, the candidate who does better on the questions is the one who had had experience — as president or vice president — in the executive branch. For example, in September 1992, only 27 percent of registered voters said they had confidence in Bill Clinton's ability to handle an international crisis, whereas 62 percent expressed confidence in then-President George H.W. Bush. Nonetheless, Clinton easily defeated Bush in that election. (I should note that hardly any registered voters were confident that the independent candidate, Ross Perot, could handle an international crisis; 83 percent were uneasy about him in that circumstance.)

Four years later, 52 percent of voters said they were confident in President Clinton's ability to handle an international crisis — and that figure rose as high as 57 percent in the wake of his impeachment troubles, as the public rallied around the troubled president.

In November 2000, there were doubts about both Vice President Al Gore and Texas Gov. George W. Bush. But Gore, the sitting vice president, had the edge. Fifty-three percent of registered voters said they were confident in his ability to handle an international crisis (41 percent were uneasy). When it came to Bush, the balance tipped negative: 44 percent were confident, while 48 percent were uneasy. But in the 2004 election, Bush had a 10-point lead over Democratic candidate John Kerry in voter confidence on handling crisis.

Attitudes about the ability to handle a crisis were seen as a weakness even for Ronald Reagan in his first years in office — just before the invasion of Grenada. But that event brought his ratings up and by the 1984 election he led Mondale by more than 20 points on this question.

The foreign crisis consideration isn't always the determining issue in presidential elections. In 2008, with the war in Iraq and the continuing concerns about terrorism, it may be. But we won't know until next year whether Sen. Clinton's gender or a candidate's international experience (or lack of it) will make a difference in the election.