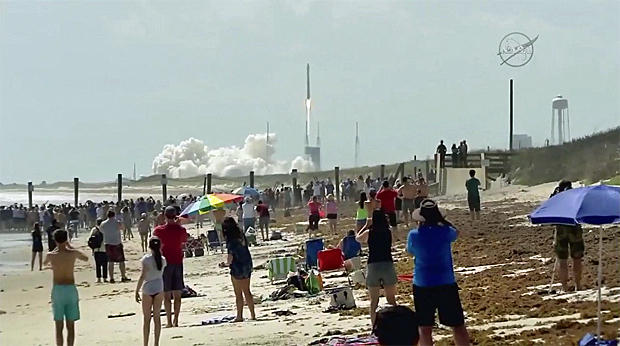 A workhorse Atlas 5 rocket blasted off from Cape Canaveral Tuesday and boosted an Orbital ATK cargo ship into space carrying more than 7,600 pounds of supplies, equipment and research hardware bound for the International Space Station.

Running a month late because of hydraulic problems and scheduling conflicts, the booster’s Russian-built RD-180 main engine thundered to life at 11:11 a.m. EDT (GMT-4), throttled up to full thrust and quickly pushed the United Launch Alliance rocket away from complex 41 at the Cape Canaveral Air Force Station.

The International Space Station passed to the east of Cape Canaveral a few minutes before launch and the Atlas 5 took off almost directly into the plane of the lab’s orbit, a requirement for spacecraft trying to rendezvous with a target moving through space at some five miles per second.

Initially flying straight up, the 191-foot-tall Atlas 5 quickly arced away to the northeast, climbing out of the thick lower atmosphere atop the RD-180’s 860,200 pounds of thrust. A little more than a minute later, the rocket was traveling faster than sound, rapidly shedding weight and accelerating as it consumed it load of first stage propellants.

Passing through 10,000 mph, the first stage engine shut down as planned four minutes and 15 seconds after liftoff and the spent stage fell away.

The hydrogen-fueled Aerojet Rocketdyne engine powering the Centaur second stage then flashed to life and burned for nearly 14 minutes to complete the climb to a 142-mile-high roughly circular orbit tilted 51.6 degrees to the equator, the same as the space station’s.

Three minutes later, the Orbital ATK Cygnus cargo ship, named in honor of John Glenn, the first American in orbit, was released from the Centaur to fly on its own.

“We are very proud of that fact, that this spacecraft is named after my former fellow astronaut John Glenn, a real pioneer in the space world who launched for the first time out of here on an Atlas rocket,” said Frank Culbertson, a former shuttle commander who manages Orbital’s Space Systems Group. “It’s a great tribute to John to be able to take his name to orbit once again.”

A bit more than two hours after launch, the Cygnus, also known as the SS John Glenn, deployed its two solar arrays and engineers reported the spacecraft was healthy and ready to begin a four-day rendezvous.

“Status of the spacecraft is great, everything is working well,” Culbertson said. “We’ve got the prop system pressurized, the power system is up, we deployed the solar arrays. ... The team is in control, and we are beginning our approach to the space station.”

It was Orbital’s seventh operational resupply launch under an initial $1.9 billion contract from NASA calling for eight flights through 2016. NASA later bought three additional flights and Orbital won a second contract for at least six more missions through 2024.

Orbital ATK normally launches Cygnus cargo ships atop its own Antares rocket, but in the wake of a 2014 launch failure, the company bought two Atlas 5s from ULA to launch two resupply missions while the Antares was being equipped with new engines.

The redesigned booster successfully flew last October, but Orbital bought a third more powerful -- and expensive -- Atlas 5 to help NASA get additional supplies to the station faster than would otherwise be possible.

Resupply spacecraft typically rendezvous with the station over two to three days, but the Cygnus, launched into an orbit more than 100 miles below its 250-mile-high target, will loiter in orbit until Saturday morning, staying well away from the space lab until after the arrival of a Russian Soyuz spacecraft Thursday morning.

The Soyuz MS-04/50S spacecraft, carrying vehicle commander Fyodor Yurchikhin and flight engineer Jack Fischer, is being readied for launch from the Baikonur Cosmodrome in Kazakhstan at 3:13 a.m. EDT Thursday. Docking at the station’s upper Poisk module is expected around 9:23 a.m. that same morning.

Assuming the Soyuz docks on schedule, the Cygnus spacecraft will make its own approach to the space station early Saturday, pulling up to within about 30 feet just after 6 a.m. and then standing by while Whitson and Pesquet, operating the station’s robot arm, lock onto a grapple fixture.

At that point, flight controllers at the Johnson Space Center in Houston will take over to pull the Cygnus in for berthing at the Earth-facing port of the central Unity module.

The cargo ship is loaded with some 7,625 pounds of cargo and equipment, including more than 2,000 pounds of science gear, 2,100 pounds of crew supplies and nearly 2,700 pounds of vehicle hardware. Also on board: 160 pounds of spacewalk equipment, about 40 pounds of Russian hardware and 38 small research satellites.

Thirty four of those Cubesats will be launched from the space station while four will be deployed from the Cygnus.

“We have a wide range of support equipment that’s going to be headed to station to support the science that’s up there already but also to introduce some brand new capabilities and some exciting new research to the station,” said Tara Ruttley, space station associate program scientist at the Johnson Space Center.

Among the cargo is an advanced plant habitat, “the largest production facility for plants ever on the space station,” Ruttley said. “It’s going to be able to grow larger plants, and larger plants lead to things like food production kind of crops.”

In the near term, scientists will evaluate how well the plant facility operates with its ability to control lighting, humidity, temperature, water flow and a wide variety of other factors.

“Eventually, as we understand how this habitat functions, I’d imagine we will evolve into crops and edible foods,” Ruttley said.