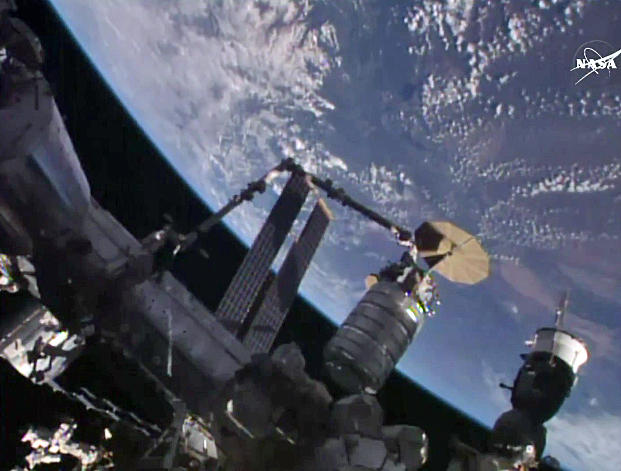 Two days after a Russian Soyuz spacecraft ferried two fresh crew members to the International Space Station, a commercial cargo ship loaded with some 7,600 pounds of supplies and equipment completed its own rendezvous early Saturday and was pulled in for berthing by the lab’s robot arm.

Launched Tuesday from Cape Canaveral, the Orbital ATK Cygnus cargo ship, named in honor of the late astronaut John Glenn, pulled up to within 40 feet of the station and then stood by while Expedition 51 commander Peggy Whitson and European Space Agency astronaut Thomas Pesquet, operating the Canadian arm, locked onto the spacecraft.

Flight controllers at the Johnson Space Center in Houston then took over arm operations and pulled the Cygnus in for berthing at the Earth-facing port of the station’s central Unity module.

“The crew of Expedition 51 would like to congratulate all the teams at NASA, Orbital ATK and the contractors for a flawless cargo delivery mission,” Pesquet radioed after grappling the cargo ship.

“We’re very proud to welcome on board the S.S. John Glenn. The more than three tons of pressurized cargo in the Cygnus spacecraft will be put to good use to continue our mission of research, exploration and discovery.”

On Monday, around 1:27 a.m., Whitson will become America’s most experienced astronaut, passing Jeff Williams’ cumulative mark of 534 days in space during his three space fights. President Trump and daughter Ivanka plan a congratulatory call to the station later Monday morning.

On May 12, Whitson and Fischer will venture outside for a spacewalk to replace an external computer, install a high-definition camera on the station’s power truss, attach micrometeoroid shielding to a docking port and help engineers troubleshoot cooling issues with a high-energy physics experiment.

Whitson is already America’s most experienced female spacewalker, with 53 hours 22 minutes of EVA time during eight previous excursions. After her ninth spacewalk, she will move up to No. 3 in the world, behind cosmonaut Anatoly Solovyev and former astronaut Mike Lopez-Alegria.

Whitson launched to the station with Novitskiy and Pesquet last November, but she will remain aboard for an extended mission when they depart in June, returning to Earth Sept. 3 with Yurchikhin and Fischer.