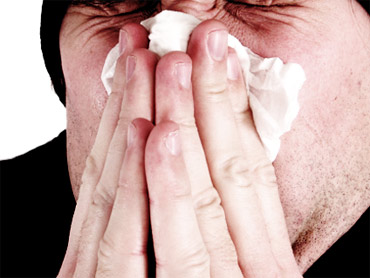 Could the cure for the common cold be right around the corner?

Scientists at Cambridge University in England are claiming a major breakthrough in the understanding of humans' natural immune systems, which may lead in the relatively near future to a cure for not only the common cold, but a host of other nasty winter viral infections.

Preventing the Common Cold, and a Cure Looming?

CBS News Medical Correspondent Dr. Jennifer Ashton explained on "The Early Show", "What British researchers are reporting is they've discovered a protein inside a cell that actually boosts the cell's virus-killing machinery, if you will, which is important, because right now, there's no cure for viruses, just treatment."

However, Ashton said, a possible cure is "a long ways off."

"It's a few years away," she said. "They're just looking at it in the lab now. But potentially, this is very exciting for the cold virus, and the norovirus and rotavirus that cause the gastrointestinal illness that plagues so many people during the winter."

According to the National Institute of Allergy and Infectious Diseases, a billion colds are caught every year, with the average American catching two to four infections a year.

"Early Show" co-anchor Maggie Rodriguez noted there are actually 200 different viruses that can cause a cold. So how can you prevent getting a cold altogether?

Ashton pointed to a recent study in North Carolina that looked more than 1,000 people, followed them for three months during the cold season, and asked them to record how much exercise they did, and when they did get colds what their symptoms were like.

She said, "They found that people who exercise five or more times a week, they were actually sweating for a minimum of 20 minutes, had 46 percent reduction in the length of their cold, and a 41 percent reduction in the severity of the cold symptoms. So, again, one more piece of evidence that suggests that when we exercise, we really stimulate the immune fighting cells in our body, and potentially reduce the impact of the cold virus."

Another cold fighter and overall health promoter is drinking a lot of water.

Ashton said, "Most people are too busy to really hydrate themselves well enough. And we say use the urine test. Your urine should be almost clear. If it is, you know that you're getting enough water. That's the best way to hydrate yourself."

Rodriguez said, "(It's) counterintuitive. You think the more people you're around the more colds you get."

Ashton responded, "Obviously you don't want to be around people who are actively sick, but you do want to have a diverse and broad social network. It's very important for your health."