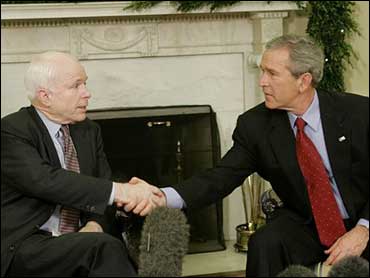 Human rights groups that praised a proposed ban on mistreating terrorism suspects warned on Friday that another provision lawmakers inserted in a final defense bill could lead to abuse at the Guantanamo Bay prison.

But Sen. Lindsey Graham, chief sponsor of the language affecting detainees held at the U.S. naval base in Cuba, rejected that. He said interrogators who mistreat prisoners would not be granted immunity from prosecution for violating the ban.

On Thursday, President Bush reluctantly signed off on a proposal to bar cruel, inhuman and degrading treatment of terror suspects in U.S. custody. Sponsored by Sen. John McCain, R-Ariz., the ban and accompanying provision would standardize interrogation tactics for U.S. troops.

With that agreement reached, House and Senate bargainers worked Friday toward completing a bill setting Pentagon policy and another $453 billion in a wartime spending measure that includes $50 billion for the Iraq war. Congress hopes to send both to the president's desk within days, possibly Saturday.

Under legislation the Senate passed last month, military panels deciding whether to indefinitely detain terror-war suspects held at Guantanamo Bay would have been barred from considering evidence obtained through "undue coercion."

During Senate-House negotiations to write a final bill, lawmakers scrapped that and inserted language saying the military panels should review whether any information was obtained through "coercion" and assess the value of that information.

Graham, R-S.C., called the language a "check-and-balance system to look at the quality of the evidence" when panels are considering whether to continue holding an enemy combatant.

But human rights groups say the language could encourage interrogators to mistreat detainees because it does not explicitly bar the panels from relying on information gained from coercive interrogation techniques to keep someone detained indefinitely.

Elisa Massimino, the Washington director of Human Rights First, called the change "a grave mistake," given that "no civilized court in the world today considers evidence that was gleaned as a result of torture or cruel and inhuman treatment."

The change "intentionally and effectively undermined" the McCain ban and "could contribute to further abuses," added Tom Malinowski, the Washington advocacy director for Human Rights Watch.

Sen. Carl Levin, D-Mich., called the new language a problem and said he hoped courts will ensure that evidence obtained through coercion is not relied upon.

"I do not believe that coerced testimony is ever appropriate," said Levin, the ranking Democrat on the Armed Services Committee.

Graham said the change "doesn't allow torture, it doesn't get people a get-out-of-jail-free card." He said interrogators still could be prosecuted for mistreating a prisoner.

The provision has been included in the final defense policy bill. Also intact is a Senate-approved provision letting Guantanamo Bay detainees appeal their detention status and punishments to a federal appeals court in Washington.

That avenue would replace the one tool the Supreme Court gave detainees in 2004 to fight the legality of their detentions — the right to file habeas corpus lawsuits in any federal court.

The final bill would prohibit detainees declared enemy combatants at Guantanamo Bay — those currently there and those who have been released — from filing any other kind of legal action against the United States or its officials.

Meanwhile, the GOP-run House voted 228-187 for a resolution to urge — but not force — House-Senate negotiators to include in the defense policy bill language requiring intelligence officials to provide classified reports to Congress on secret U.S. detention facilities abroad.

Although symbolic, the vote showed that despite Mr. Bush's acceptance of McCain's ban on torture-like treatment of detainees, the issue of how the U.S. handles terrorism suspects has not died. It also showed that GOP lawmakers remain unafraid to buck the president on the issue.

The administration has refused to confirm news reports that the CIA runs secret detention facilities abroad. But lawmakers of both parties say they have been troubled by the reports, and the Senate inserted the disclosure provision, sponsored by Sen. John Kerry, D-Mass., into its version of the defense bill.

The House version omitted it, but the vote puts pressure on negotiators to include the provision in the bill sent to the president's desk.

The House also voted Friday, for the second time in as many months, to reject a call for withdrawing U.S. troops from Iraq. Democrats said the vote was politically driven and designed by Republicans to limit debate on the war.

In a 279-109 vote, the GOP-controlled House approved a resolution saying the chamber is committed "to achieving victory in Iraq" and that setting an "artificial timetable" would be "fundamentally inconsistent with achieving victory."

Democrats voted against the resolution by about a two-to-one margin, highlighting divisions within the party over alternatives to Mr. Bush's Iraq war policies.