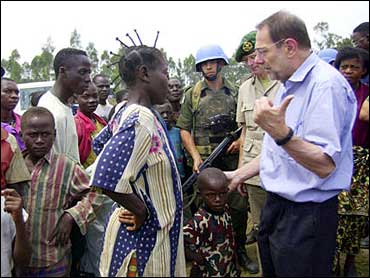 Nighttime killings, rapes and abductions have gripped the capital of a volatile region in northeastern Congo despite the deployment of a French-led emergency force in the town, an international aid group said Friday.

The military force began arriving in Bunia on June 6 to stem fighting between rival tribal factions that killed hundreds of people.

But the force "so far has only offered an illusion of protection" for the residents in Bunia, said Hilary Bower, an official with Medecins sans Frontieres.

"Despite the force deployment, war is always close by. At night the fighters enter certain neighborhoods to loot, kill and terrorize civilians. And the ideologues of hate continue to spread their message calling for killings," the group, known in English as Doctors Without Borders, said in a report released Friday.

The French-led emergency force has 1,100 troops in Bunia, the capital of troubled Ituri province, and has forced tribal fighters in the town to either give up their weapons or leave.

But fighters remain on the outskirts, and fighting has continued elsewhere in Ituri — scene of some of the worst atrocities that have taken place during the five-year civil war in Congo.

Soldiers from the emergency force visited Nizi the following day and exchanged fire with 10 Lendu fighters still in the town, wounding one, Dubois said.

Some 500 people were killed in May when fighters from the rival Hema and Lendu tribes battled for control of Bunia; thousands of others were forced to flee their homes. Aid groups estimate that since 1999, more than 50,000 people have been killed in Ituri, one of Congo's richest provinces in natural resources.

"Some 150,000 people are believed to have fled to areas surrounding Bunia. Upsurges of violence and fighting continue to affect these zones," according to the report titled "Ituri: Unkept Promises?"

"Villages have been attacked, houses looted and burned and people killed," it said.

The deployment of the emergency force was authorized by the Security Council, but it operates independently of the U.N. force in Congo.

The war erupted in August 1998 when neighboring Rwanda and Uganda sent troops into Congo to support rebels seeking to oust then-Congolese President Laurent Kabila. They accused him of supporting insurgents from their countries who they said were threatening regional security.

Zimbabwe, Angola and Namibia sent troops to back Kabila.

The foreign troops have withdrawn and the main rebels groups and the Congolese government have set up a new transitional administration, but fighting between rival factions continues in eastern and northeastern Congo.

"This isn't a war with civilian casualties any more; this is a war against civilians," Bower said.