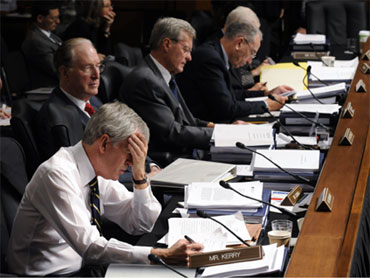 The head of the nonpartisan Congressional Budget Office, Douglas Elmendorf, told senators that seniors in Medicare's managed care plans could see reduced benefits under a bill in the Finance Committee.

The bill would cut payments to the Medicare Advantage plans by more than $100 billion over 10 years.

Elmendorf said the changes "would reduce the extra benefits that would be made available to beneficiaries through Medicare Advantage plans."

Finance Committee aides emphasized that core Medicare benefits wouldn't be cut because the plans are required to offer the benefits available under traditional Medicare fee-for-service coverage.

Federal subsidies to private Medicare plans average about 14 percent higher than those involved in fee-for-service coverage. The health care bills pending in Congress would reduce or eliminate the difference in part by introducing a competitive bidding system to pay the plans. The private plans cover around 25 percent of Medicare beneficiaries.

The Finance Committee bill along with other health care legislation in Congress would cut around $500 billion in projected Medicare payments to providers over a decade, including around $125 billion from Medicare Advantage.

Obama has pushed the cuts to providers even while repeatedly insisting they won't reduce seniors' benefits. "Nobody is talking about cutting Medicare benefits," Obama said during an online AARP forum in July.

"Health insurance reform will strengthen Medicare for seniors, not diminish it," said White House spokesman Reid Cherlin. "Even under the competitive bidding proposal in the legislation, Medicare Advantage plans will still be paid more than traditional Medicare plans. Yes, they'll need to compete, and they'll need to be more efficient, but they'll still have more money to work with than traditional Medicare."

To that effect, the White House on Wednesday morning released a seven-page document (PDF) called "Health Insurance Reform and Medicare: Making Medicare Stronger for America's Seniors" that lays out the argument for reducing Medicare Advantage costs.

Finance Committee Democratic Sen. Bill Nelson of Florida, whose state is home to many seniors, plans to offer an amendment to the bill to protect current Medicare Advantage beneficiaries from losing benefits. Committee Chairman Max Baucus, D-Mont., has already agreed to hold benefits stable for plans in areas of the country where they deliver more efficient care, but it's not clear precisely which areas would be affected.

Elmendorf also said he expected the Medicare Advantage plans to lose 2.7 million enrollees over the next decade. He said most of that was from people who would have signed up but who won't because of the changes, as opposed to people quitting the plans.