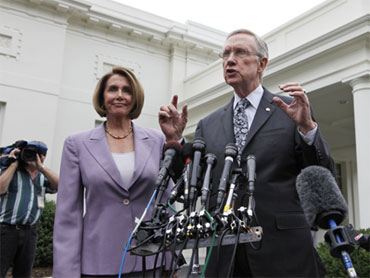 American families would be fined up to $3,800 for failing to buy health insurance under a plan that circulated in Congress on Tuesday as divisions among Democrats undercut President Obama's effort to regain traction on his health care overhaul.

As Obama talked strategy with Democratic leaders at the White House, the one idea that most appeals to his party's liberal base lost ground in Congress. Prospects for a government-run plan to compete with private insurers sank as a leading moderate Democrat, Sen. Max Baucus of Montana, said he could no longer support the idea.

The fast-moving developments put Mr. Obama in a box. As a candidate, he opposed fines to force individuals to buy health insurance, and he supported setting up a public insurance plan. On Tuesday, fellow Democrats publicly begged to differ on both ideas.

Democratic congressional leaders put on a bold front as they left the White House after their meeting with the president.

House Speaker Nancy Pelosi, D-Calif., insisted the public plan is still politically viable. "I believe that a public option will be essential to our passing a bill in the House of Representatives," she said.

After a month of contentious forums, Americans were seeking specifics from the president in his speech to a joint session of Congress on Wednesday night. So were his fellow Democrats, divided on how best to solve the problem of the nation's nearly 50 million uninsured.

The latest proposal: a ten-year, $900-billion bipartisan compromise that Baucus, who heads the influential Finance Committee, was trying to broker. It would guarantee coverage for nearly all Americans, regardless of medical problems.

But the Baucus plan also includes the fines that Mr. Obama has rejected. In what appeared to be a sign of tension, White House spokesman Robert Gibbs pointedly noted that the administration had not received a copy of the plan before it leaked to lobbyists and news media Tuesday.

Baucus said Tuesday he's trying to get agreement from a small group of bipartisan negotiators in advance of Mr. Obama's speech. "Time is running out very quickly," he said. "I made that very clear to the group."

Some experts consider the $900-billion price tag a relative bargain because the country now spends about $2.5 trillion a year on health care. But it would require hefty fees on insurers, drug companies and others in the health care industry to help pay for it.

Just as auto coverage is now mandatory in nearly all states, Baucus would require that all Americans get health insurance once the system is overhauled to make premiums more stable and affordable. Penalties for failing to do so would start at $750 a year for individuals and $1,500 for families. Households making more than three times the federal poverty level - about $66,000 for a family of four - would face the maximum fines. For families, it would be $3,800, and for individuals, $950.

Baucus would offer tax credits to help pay premiums for households making up to three times the poverty level, and for small employers. Upper middle-class households making between three and four times the poverty level would not have to pay more than 13 percent of their income for health insurance. People working for companies that offer coverage could avoid the fines by signing up.

Nonetheless, the fines pose a dilemma for Mr. Obama. As a candidate, the president campaigned hard against making health insurance a requirement, and fining people for not getting it.

"Punishing families who can't afford health care to begin with just doesn't make sense," he said during his party's primaries. At the time, he proposed mandatory insurance only for children.

White House officials have since backed away somewhat from Obama's opposition to mandated coverage for all, but there's no indication that Obama would support fines.

One idea that Mr. Obama championed during and since the campaign - a government insurance option - appeared to be sinking fast.

House Majority Leader Steny Hoyer, D-Md., told reporters a Medicare-like plan for middle-class Americans and their families isn't an essential part of legislation for him. Hoyer's comments came shortly after a key Democratic moderate said he could no longer back a bill that includes a new government plan.

That left liberals in a quandary. They've drawn a line, saying they won't vote for legislation if it doesn't include a public plan to compete with private insurance companies and force them to lower costs.

Rep. Mike Ross, D-Ark., who once supported a public option, said Tuesday that after hearing from constituents during the August recess, he's changed his mind.

"If House leadership presents a final bill that contains a government-run public option, I will oppose it," Ross said.

Democrats are considering a fallback: using the public plan as a last resort if after a few years the insurance industry has failed to curb costs. That approach is also being pushed by Sen. Olympia Snowe, R-Maine, a moderate whose support could be critical to any health legislation.

Snowe said Tuesday that Mr. Obama's been open to her fallback idea.

"He's been receptive, recognizing that there's difficulties with the public option," Snowe said. Republicans have cast it as a government take-over.

Baucus is calling for nonprofit co-ops to compete in the marketplace instead of a public plan.

An 18-page summary of the Baucus proposal was obtained by The Associated Press. The complex plan would make dozens of changes in the health care system, many of them contentious. For example, it includes new fees on insurers, drug companies, medical device manufacturers and clinical labs.

People working for major employers would probably not see big changes. The plan is geared to helping those who now have the hardest time getting and keeping coverage: the self-employed and small business owners.