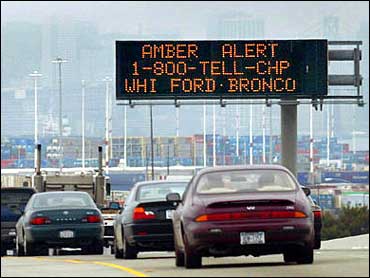 The House passed the bill 400-25 hours before the Senate approved in on a 98-0 vote. The legislation now goes to President Bush, who is expected to sign it.

The Senate vote was interrupted by five protesters against the war in Iraq who chanted, "No money for war." Capitol police removed the protesters from the Senate gallery.

House and Senate Republicans put the bill on a fast track last month, looking to get something to the White House before leaving Friday for a two-week spring break.

House Judiciary Chairman James Sensenbrenner of Wisconsin called the finished bill "the most important and far-reaching child protection legislation in the past 20 years."

Sensenbrenner and Senate Judiciary Committee Chairman Orrin Hatch, R-Utah, shepherded the stronger criminal penalties through the House by attaching them to the popular Amber Alert kidnapping-notification legislation. That measure was sought by the family of Elizabeth Smart, who was recovered in March after being taken from her bedroom in Salt Lake City last year.

"The overarching goal of this comprehensive package is to stop those who prey on children before they can harm children," said Sensenbrenner.

The national network would be named after Amber Hagerman, a 9-year-old girl abducted in Arlington, Texas, and later found murdered.

"These types of criminals who prey on our nation's youth are nothing less than the scum of earth, who deserve every ounce of punishment which we as a nation can fairly and justly mete out," Hatch said.

Some Democrats, who support a stand-alone Amber Alert bill passed by the Senate, argued that provisions in the bill reducing federal judges' discretion in sentencing criminals should have been debated longer. The Senate never debated the legislation before passing it as part of the House-Senate compromise.

Sen. Edward Kennedy, D-Mass., said Democrats would have gladly approved just the Amber Alert bill months ago. "But we question and wonder why it should carry with it such extraneous kinds of material which this legislation carries," he said.

Despite their complaints about the additional provisions, House and Senate Democrats voted for the Amber Alert bill anyway.

Rep. Martin Frost, D-Texas, said the compromise would be better than waiting even longer to get the national network in place. "It should not have been this hard, but we can now see the light at the end of the tunnel," he said.

Republicans said the additional measures were needed, too.

"Amber Alert is wonderful at attempting to retrieve children who are kidnapped and taken across state lines," said Rep. Tom Feeney, R-Fla. "What we've tried to do is to deter and punish people and put them behind bars."

Lawmakers rushed to get the Amber Alert legislation through after Elizabeth Smart was returned to her parents in March. "The family is grateful for passage in the House and they are very, very anxious to see the legislation pass in the Senate so it can be enacted into law," Smart family spokesman Chris Thomas said before the Senate vote.

The legislation would provide matching grants to states and communities for equipment and training for the network, which will distribute information quickly, through radio and television broadcasts and electronic highway signs, about kidnapped children and their abductors.