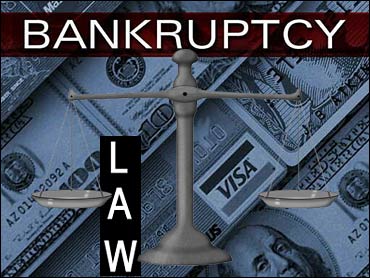 Bankruptcy lawyers expect thousands of debt-burdened people to rush to courthouses to beat a new law making it harder to wipe the slate clean of credit card bills and other obligations.

The biggest changes in U.S. bankruptcy laws in a quarter-century will occur 180 days after President Bush signs a bill that Congress sent him Thursday. The 30,000 to 210,000 people that the American Bankruptcy Institute estimates will be affected by the new law can escape its impact if they file for bankruptcy before then.

Mr. Bush said he was eager to sign the bill to curb abuses of the system. "These commonsense reforms will make the system stronger and better so that more Americans — especially lower-income Americans — have greater access to credit," he said.

"We will be up working late trying to get those petitions filed before the deadline," said Eric Roland Spencer, a bankruptcy attorney practicing in Roanoke, Va.

In recent weeks as Congress has debated the legislation, Spencer said, he's seeing seven to eight clients a day, up from four a day beforehand.

The bill passed by the House Thursday on a 302-126 vote marks the second major change in law to benefit business since Republicans increased their House and Senate majorities in last fall's elections. The Senate passed the bill last month, 74-25.

The legislation has been a long-time goal of credit-card companies and banks, and primarily affects consumers of such services, CBS News Radio Correspondent Bob Fuss reports.

It doesn't affect corporate bankruptcy, but dramatically re-writes the rules for individuals in financial trouble. The law will make it harder for the financially strained to start over, and require thousands of would-be filers to keep paying, even when drastically in debt, Fuss reports.

Legislators who voted for the bill say the changes will stop people from declaring bankruptcy to avoid paying their bills. But the major changes also wipe out a safety net for people like Brooklyn, N.Y., resident Hector Cintron, a former police officer whose plight illustrates the impact this new law will have.

Cintron spoke with CBS News Correspondent Jim Axelrod as he examined the piles of credit card bills accumulated on his table. Due to his mother's illness and expenses of caring for his children, Cintron owed about $50,000 on credit cards.

"I was ashamed," Cintron said. "I was embarrassed. I didn't want to go [to the courthouse and declare bankruptcy], but I was told I should."

The idea of starting over with a "clean slate," which the old bankruptcy code provided for, was appealing to Cintron, he told Axelrod.

"I just wanted to, like when you get a heart transplant or something, get a new lease on life," he said.

But the new measure facing people in Cintron's position will requires those with incomes above a certain level to pay credit-card charges, medical bills and other obligations under a court-ordered bankruptcy plan.

Opponents say the change would fall especially hard on low-income working people, single mothers, minorities and the elderly and would remove a safety net for those who have lost their jobs or face crushing medical bills.

The legislation "protects the credit industry at the expense of the consumer," Rep. Alcee Hastings, D-Fla., declared in House debate. "It will drive more Americans deeper into financial crisis and weaken the nation's economy and social structure."

But backers in Congress and the financial services industry argue that bankruptcy frequently is the last refuge of gamblers, impulsive shoppers, divorced or separated fathers avoiding child support, and multimillionaires — often celebrities — who buy mansions in states with liberal homestead exemptions to shelter assets from creditors.

Rep. David Dreier, R-Calif., said the legislation would save American families an average $400 a year in higher interest rates now charged to consumers to recoup losses from those who abuse bankruptcy proceedings.

In a bitter scene on the House floor, Democrats — most of whom opposed the legislation — used an array of parliamentary maneuvers to delay the final vote, forcing an unsuccessful roll call vote on adjourning the session and lining up one by one to register their objections in brief, biting statements.

Democrats were furious that the GOP leadership allowed none of the 35 amendments they had proposed earlier to be voted on. They particularly wanted provisions that would exempt from the new bankruptcy requirements military personnel returning from Iraq and Afghanistan, and people whose indebtedness is the result of financial identity theft.

Between 30,000 and 210,000 people — from 3.5 percent to 20 percent of those who dissolve their debts in bankruptcy each year in exchange for forfeiting some assets — would be disqualified from doing so under the legislation, according to the American Bankruptcy Institute.

Taking effect six months from enactment, the measure would set up an income-based test for measuring a debtor's ability to repay debts. Those with insufficient assets or income could still file a Chapter 7 bankruptcy, which, if approved by a judge, erases debts entirely after certain assets are forfeited. Those with income above the state's median income who can pay at least $6,000 over five years — $100 a month — would be forced into Chapter 13, where a judge would then order a repayment plan.

The legislation also would require people in bankruptcy to pay for credit counseling.

Underscoring the issue's political sensitivity, the liberal group MoveOn was beginning a campaign of radio ads this week against House lawmakers of both parties who support the legislation.

"We're going to call the Republican agenda what it truly is: a war on the middle class," said Tom Matzzie, the Washington director of MoveOn's political action committee.