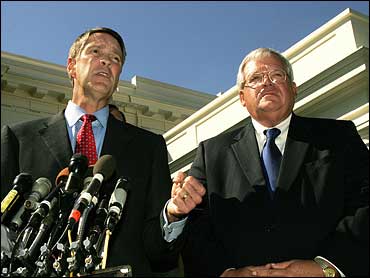 Congress finalized a defense spending bill that funnels extra money to the Gulf Coast and Iraq. The GOP-run Congress completed the two bills in a scramble to finish a year complicated by standoffs with Democrats and disagreements among Republicans.

The defense bill keeps the Pentagon running, while also channeling $29 billion in hurricane aid to the Gulf Coast and $50 billion more to military action in Iraq and Afghanistan.

The Patriot Act extension keeps anti-terrorism laws that were due to expire Dec. 31 in place until Feb. 3. It allows the FBI to continue to investigate terrorism cases using powers granted in 2001, include roving wiretaps and the authority to intercept wire, spoken and electronic communications relating to terrorism.

Congress completed the legislation even though most lawmakers had already headed home for the holidays. Congressional rules allow bills to pass without a recorded vote as long as no lawmaker objects.

House approval sent the defense bill to the president, including its $3.8 billion for bird flu preparedness and liability protections for flu drug manufacturers. The $29 billion for the Gulf Coast included $11.5 billion for community grants to spur economic development, along with aid for schools and money to start shoring up New Orleans' levees.

President Bush applauded Congress' passage of the troop-funding bill and said he looks forward to signing it.

"This funding will help us continue to hunt down the terrorists, pursue our strategy for victory in Iraq and make America more secure," he said in a statement.

But it will not be the Christmas present the administration wished for after Republicans earlier lost a quarter-century campaign to open the Alaska National Wildlife Refuge to oil drilling.

That drilling authority was stripped out of the bill. The change also eliminated roughly $2 billion in emergency aid for low-income families facing high heating bills this winter.

Three of the Senate's Northeast Republicans secured a promise from GOP and Democratic leaders to enact $2 billion in emergency funding for heating assistance in January, after the Senate votes on Samuel Alito's nomination to the Supreme Court.

Lawmakers also could find themselves debating the Patriot Act anew in January after putting the law on a short leash, extending it to Feb. 3, instead of the six months originally planned.

Rep. James Sensenbrenner, R-Wis., said he didn't trust the Senate to act swiftly no matter how long the extension, so he pushed for one as short as possible. He said the White House and House Speaker Dennis Hastert, R-Ill., concurred.

Mr. Bush and Republican leaders had insisted the law be permanently extended before its scheduled expiration, but they were stymied by a Senate filibuster and criticisms that the legislation failed to protect the civil liberties of innocent Americans.

House and Senate Democrats said they had no problem with the shorter extension, and opponents of the law signaled they would not back down.

The White House also will get an empty budget stocking from the GOP-controlled Congress this year as Republican leaders were forced to postpone completion of a promised deficit-reduction package curbing the growth of federal programs like Medicare and Medicaid.

Republicans worked on the deficit reduction measure all year, and conservatives saw it as a chance to re-establish the GOP's fiscal credentials. But it sparked a political firestorm from Democrats.

It passed the Senate with Vice President Dick Cheney casting a tie-breaking vote. But Senate Democrats maneuvered to make minor changes in the bill, forcing it back to the House for another vote.

House Democrats said they will not let the nearly $40 billion spending reduction package go without a fight. It "fails the moral test by slashing assistance to the middle class and our most vulnerable citizens," Pelosi said in a statement.

Hastert had asked the Democrats to set politics aside for the sake of programs in the bill like medical aid for Katrina victims, help for dairy farmers and doctors who treat Medicare patients.

Ron Bonjean, a spokesman for Hastert, issued a statement comparing Pelosi to the Grinch, who "wants to take all of the holiday help away from the American people."

The bill marked the first attempt in years to curtail government programs like student loans, Medicare and Medicaid. It also would impose new fees on companies to aid the government's pension insurance system and garner billions of dollars by selling a portion of the analog spectrum.