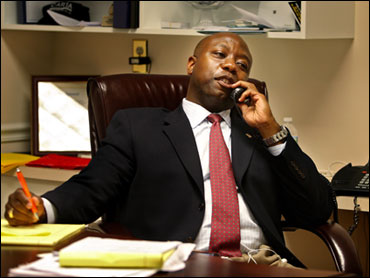 West vowed last week to join the Congressional Black Caucus once he got to Congress - even if the group didn't want him.

"I plan on joining, I'm not gonna ask for permission or whatever, I'm gonna find out when they meet and I will be a member of the Congressional Black Caucus," he told WOR radio, as The Hill reports. "I meet all of the criteria, and it's so important that we break down this monolithic voice that continues to talk about victimization and dependency in the black community."

He added that "it's time for some different voices to be in that body politic."

West, who will be representing Fort Lauderdale and Palm Beach, says he represents "a growing conservative black voice" in America.

In response to West's comments, CBC Chairwoman Barbara Lee (D-Calif.) released a statement to CBS News saying that black Republicans are welcome to join the group.

"Should either of the two African American Republicans recently elected to the House of Representatives request membership in the Congressional Black Caucus they will be welcomed," she said.

Lee said there have been three African-American Republicans in the House during the CBC's 40 year history: Watts, Melvin Evans of the Virgin Islands and Gary Franks of Connecticut. Watts, she said, declined to join the group, though Evans and Franks did so.

"Membership in the Congressional Black Caucus has never been restricted to Democrats," she said.

Scott told Politico that he is "leaning against" joining the CBC.

"My experience has been the whole notion of one nation," Scott said. "So I really shy away from things that create some kind of boundaries. ... It highlights the divisions I've been pushing forward to erase."