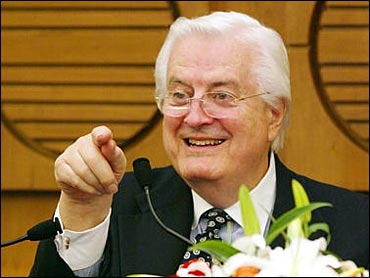 Hyde announced Monday, his 81st birthday, that he will retire when his term ends after the 2006 election. Hyde, who has served in Congress for three decades, said physical limitations from back surgery two years ago have made it "increasingly difficult to run around in the places you have to be a successful congressman."

"Father Time and Mother Nature both stalk every one of us, and they finally caught up with me," Hyde said in Tuesday's (Arlington Heights) Daily Herald.

He did not return calls from The Associated Press seeking comment, but told the Chicago Tribune that leaving Congress will be "the saddest day of my life."

Hyde was first elected to the House in 1974 from his northwest suburban Chicago district. He is chairman of the House International Relations Committee and chaired the House Judiciary Committee from 1995 to 2001.

Hyde "has been a standard-bearer for conservative principles, causes and beliefs. His leadership will be sorely missed on those fronts," said Rep. John Shimkus, R-Ill.

Despite his conservative reputation, Hyde was not always a Republican. He grew up in Chicago as an Irish-Catholic Democrat but by 1952 had switched parties and backed Dwight Eisenhower for president. In Congress, he occasionally crossed party lines to support measures such as gun control and medical leave for workers.

Hyde became a national figure in 1976, his second year in Congress, when he sponsored a House measure prohibiting federal funding of abortions. The U.S. Supreme Court declared the "Hyde amendment" constitutional in 1980.

His national profile rose again in 1998 when he was the chief manager of the House impeachment case against President Clinton. Some Democrats considered the former Chicago defense attorney with a strong reputation for fairness to be perhaps the best person Mr. Clinton could reasonably expect to see in the job.

While the Senate was unwilling to remove Mr. Clinton from office, Hyde said the president should be held accountable for lying under oath.

"All a congressman ever gets to take with him when he leaves is the esteem of his colleagues and constituents, and we have risked that for a principle, for our duty as we have seen it," Hyde said in closing arguments before the Senate in 1999.

While busy with the investigation of Mr. Clinton, the congressman was forced to deal publicly with his own sex life. An Internet publication reported he had an affair while a married father in the 1960s.

Hyde branded it an attempt to intimidate him but didn't deny the affair, which he described as "my youthful indiscretions."

Earlier, Hyde was among the 12 former directors and officers of the Clyde Federal Savings and Loan sued for gross negligence by federal regulators after the 1990 failure of the North Riverside, Ill.-based institution. The failure cost taxpayers an estimated $68 million.

Hyde, who left the S&L in 1984, insisted he engaged in no wrongdoing and was the only director who refused to contribute to an $850,000 settlement that led to the lawsuit's dismissal in 1997.

Hyde has a history degree from Georgetown University and law degree from Loyola University. He served seven years in the Illinois House starting in 1967, two as House majority leader.

He said he isn't sure what he will do next but he will miss Congress.

"I just want to be remembered as a good man who did some good," he told the Chicago Sun-Times.