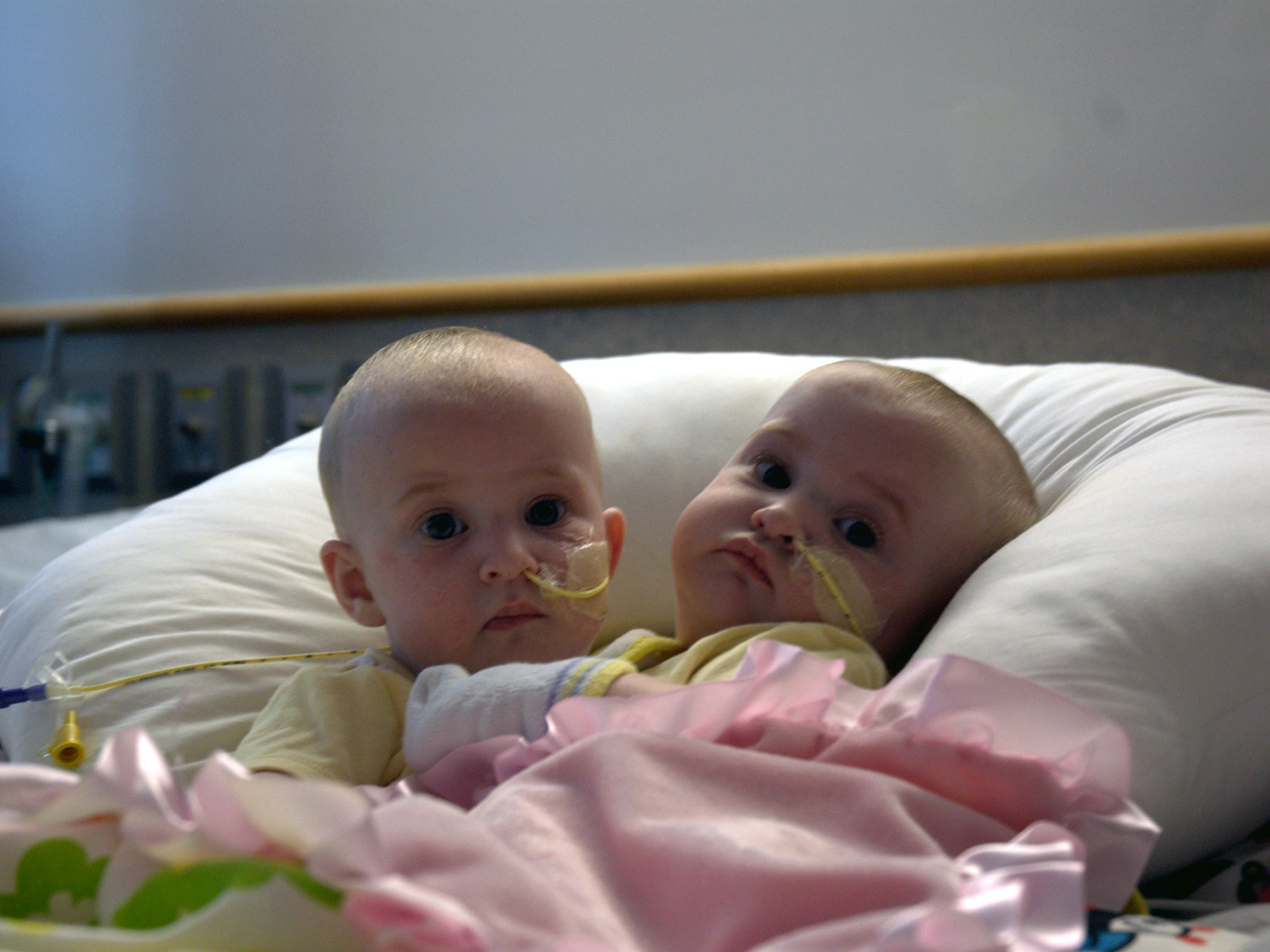 Two conjoined twin girls were successfully separated by a medical team at The Children's Hospital of Philadelphia (CHOP) on Wednesday afternoon.

Eight-month-old Allison June and Amelia Lee Tucker were joined at the lower chest and abdomen. The two sisters shared a chest wall, diaphragm, pericardium and liver.

"This has been one of the most incredible journeys for our family, but we are excited about the next phase in Allison's and Amelia's lives," mother Shellie Tucker said in a press release.

Shellie and Greg Tucker discovered they had conjoined children 20 weeks into pregnancy and the twins have been monitored by the CHOP Center for Fetal Diagnosis and Treatment ever since. The two girls have spent their whole lives so far living at the hospital.

It took Dr. Holly L. Hedrick, a pediatric general, thoracic and fetal surgeon, and about 40 other medical professionals approximately seven hours to separate the girls and complete the necessary reconstructive surgery. This is the 21st case of separating conjoined twins for the hospital.

"Like all separations of conjoined twins, this was a very complex surgery, but it went very well and as expected," Hedrick said in a press release.

According to the University of Maryland Medical Center, conjoined twins occur about once every 200,000 live births and can be documented back to at least 1100 when two twin girls, Mary and Eliza Chulkhurst from Kent, England, were born joined at the hip. Conjoined twins used to be called Siamese twins because of a famous pair in 1811 named Eng and Chang Bunker from Thailand, which was called Siam at the time, but the term is no longer used.

Conjoined twins occur when one fertilized egg divides into two fetuses but does not separate, according to the Mayo Clinic. The process of egg separation usually occurs 12 days after conception, but in conjoined twins it is believed that the separation is delayed until 13 to 14 days after conception. The result is identical twins that are connected and how far the egg splits and where determines where the connection will be. Another theory states that two separate embryos manage to combine together in early development.

There are about a dozen different ways conjoined twins can be connected, with the majority -- 40 percent -- of cases involving a connection at the upper portion of the torso, the University of Maryland Medical Center reported. These twins are known as thoracopagus twins, and they often share a heart making them impossible to separate.

Alison and Amelia have an omphalopagus connection, which accounts for 33 percent of all conjoined twins according to the University of Maryland Medical Center. They were determined early on to be "excellent candidates" for separation.

The survival rate for conjoined twins is between 5 and 25 percent, the University of Maryland Medical Center said. Forty to 60 percent of conjoined twins are born stillborn, and 35 percent only survive one day. Female pairs account for 70 percent of the cases, and are three times more likely to be born alive than their male counterparts.

Depending on the kind of connection, survival rates after separating vary. On average, one twin will survive separation about 75 percent of the time, the University of Maryland Medical Center wrote.

Allison and Amelia are currently recovering, a process that is expected to take months.

"We expect that, with this complex surgery behind them, Allison and Amelia will receive the care, therapy and support to allow them to live full, healthy and independent lives," Hedrick stated.