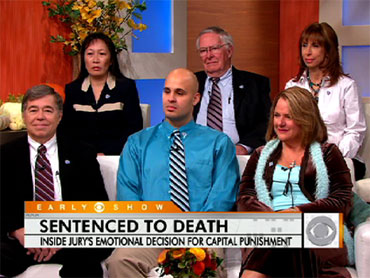 The Connecticut man convicted last month of the brutal murders of Jennifer Hawke-Petit and her two daughters, Michaela, 11, and Hayley, 17, in a Home invasion was sentenced to death by a jury Monday.

Steven Hayes, 47, and Joshua Komisarjefsky broke into the Petits' home in July 2007, tying up Dr. William Petit's daughters, sexually assaulting Michaela and, raping and strangling Jennifer before dousing all three with gasoline and setting the house on fire.

The jury deliberated 17 hours over four days before deciding on death.

On "The Early Show," six of the jurors -- Maico Cardona, Diane Keim, Herbert Gram, Paula Calzetta, Joel Zemke, and Jennifer Turner -- reaffirmed their decision, each saying "yes" when asked by co-anchor Maggie Rodriguez if Hayes should die by lethal injection.

Cardona described the deliberation process, saying, "I think everybody went in with their own thoughts, their own ideas, and we all wanted to hear the evidence and we wanted to weigh everything properly. We definitely took our time. We wanted to make sure that we followed the laws of the state of Connecticut, and we followed the instructions that the judge gave us. So we took our time and we did it."

Rodriguez asked Calzetta, "What do you see when you look at Steven Hayes?"

She replied, "A vacant man. A shell. And that was -- that was pervasive from the beginning. I kept looking to see if there is some form of life within. Just a constant shell. So it was hard to see -- to get a read on him, really."

Rodriguez remarked, "I have no involvement in this case, other than reporting it. And yet I find myself sometimes so affected by it, I can't get it out of my head. You are in it, having to look at these photographs day after day of these girls that were burned while tied to their beds. Having to sit face-to-face from Dr. Petit -- how do you keep it, Diane, from consuming you?"

Keim said, "I think that was a challenge for all of us. To keep our emotions in check the best we could. We were given the task to work within -- work in concert with the law, and in doing that, that's why it has taken us four days to make the decisions and reach a consensus. Because that was a battle within all of us. We have a man's life, you know. We were looking at his life, we were looking at, 'Should we give him death,' and it was difficult for all of us. And it took courage for us to reach a consensus."

But in the end, they did agree, a decision that Dr. William Petit, the father and husband of the slain women, had hoped for.

Gram said the jury had the opportunity to meet with Petit in the basement of the courthouse after the proceedings.

Gram said, "Probably, that was one of the most touching moments, to actually shake his hand, and feel with him a feeling of having come to a conclusion, or come to a sensible end to this -- this horrible thing that he went through. There's no question the man has strength. If any one of us could follow this man's strength, you would have walked a good road."

Calzetta added, "And his whole family, having lived through this for however many weeks, we've come to feel like we know the girls, and know the family, and his mom, especially, for me, it was very -- the grandparents were very -- that was very touching for me to see them there day-after-day."

Cardona said, "He thanked us. It kind of threw us back. Why are you thanking us? We just followed the letter of the law. It was what we were supposed to do and we did it."

But Cynthia Renn, Jennifer's sister, said of the jury on "The Early Show," "I'm very moved by what they speak of, and how difficult it was for them."

How is the family dealing with the decision?

Renn said when she heard the jury had returned the death penalty, she "had a huge sense of relief."

She said, "I don't think it ever sounds good that you're thinking about taking another person's life, but in the events of what happened, and the things that this man caused, I feel that it calls for what they decided upon."

Hawke, an ordained minister, said on "The Early Show" he's come to feel the death penalty is justified in the death of his daughter and granddaughters.

He said, "Well, we entered into the whole situation confronted -- confronting our lives with that very question. We really felt like we were between a rock and a hard place, for we value life so much. But, we have become aware, over these three plus years of the terrible killing that took place on that July day back in 2007. That we have come to realize that there are some people who just do not deserve to live in God's world. And we feel that Steven was one of those. He has spent the largest part of his life in crime activities, being in and out of jails and prison, and lying and conniving and alibi-ing in order to be paroled. And every time he would go out, after saying that he wanted to be a changed person, he never changed at all, and went right back to those same activities and that led him up to that experience on July 23, when he took the lives, in such a heinous way, of our family."

Marybelle said she was very touched by the fact that her granddaughters' pictures were kept with the jurors during their deliberations.

"I can understand them doing that," she said. "I know that they put themselves into this responsibility, and really took a lot of courage for them to face, day after day, of the situation in court. And while we were sitting there, going through all the agony of the repeated messages that came through, we still could understand that they were giving a large part of their lives to the efforts that they had, so we were proud that they were the people they were, and so thoughtful and caring forth so well in their task."