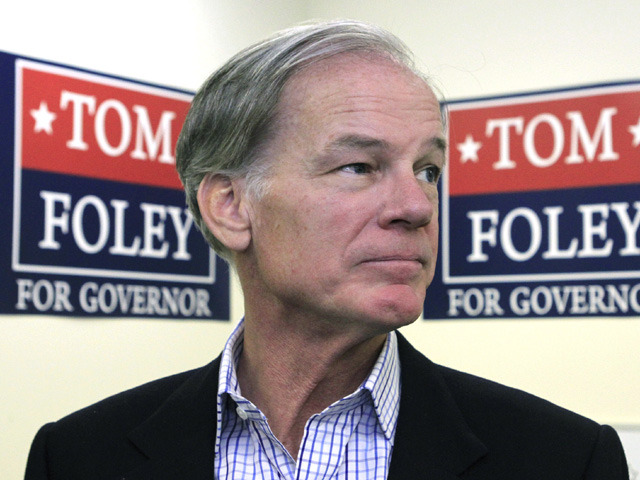 Amid news that Democrat Dan Malloy appears to have the votes to win Connecticut's embattled gubernatorial race, Republican Tom Foley now says he may challenge the vote totals, according to the Associated Press.

In a press conference this morning, Foley left the door open to a possible legal challenge and urged Connecticut Secretary of State Susan Bysiewicz to postpone the official announcement of a victor, due to myriad delays, errors, and confusion that have plagued the state's electoral process.

"We are being laughed at around this country," Foley said, according to the New Haven Independent. "I don't want to create a situation where a result is declared here and then it's changed ... Let's just take our time."

Foley's statement came after the revelation this morning of Bridgeport's final vote count, which appeared to put Malloy over the top. According to the Hartford Courant, Malloy received 17,973 votes in the heavily Democratic city, as compared to Foley's 4,099.

According to the Courant, the numbers now appear to show Malloy leading Foley with 566,351 votes to Foley's 560,886 - a difference of 5,465. Connecticut state law requires a recount only if the final vote tally shows two candidates within 2,000 votes of each other.

Secretary of State Susan Bysiewicz, Connecticut's top polling official, is expected to officially announce Malloy's victory after the Bridgeport votes were delivered to her in Hartford.

A series of missteps in the Connecticut voting process have complicated the resolution of an already-close race. On Tuesday night, a number of voters were given photocopied ballots after several polling stations ran out of official ballots. A state judge then ordered 12 polling stations to stay open an additional two hours - the legality of which some questioned - and the photocopied ballots were counted by hand.

Bysiewicz declared Malloy winner of the race on Wednesday night, but by Thursday was still unable to reveal a final vote count. As of Thursday, both Malloy and Foley had announced the formation of transition teams.

Yesterday, Mayor Finch also revealed that a bag of 336 unopened ballots were belatedly found at a polling site, according to the New York Times. (Those ballots were counted and included in the final tally.)

Finch, however, maintains that he does not anticipate encountering any problems with the Bridgeport votes. "I can assure you that every vote in Bridgeport was counted, and counted accurately," he said. "There are no hanging chads here. Every vote was counted, period."