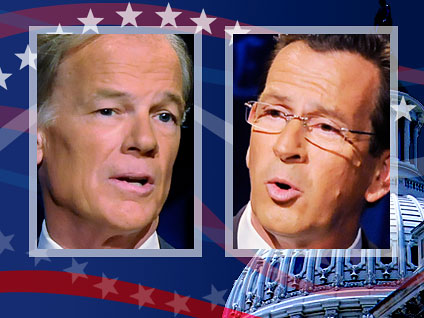 Connecticut's gubernatorial results remain up in the air on Thursday, but that hasn't stopped both the Democratic and Republican candidates involved from moving forward with their transitional plans on the way to the governor's job.

On Wednesday, Connecticut's top election official, Secretary of State Susan Bysiewicz, declared Democrat Dan Malloy as the winner of what has been an incredibly tight gubernatorial contest. But the vote count so far from the Associated Press shows shows Republican Tom Foley ahead by more than 8,000 votes. And Foley has refrained from conceding the contest.

Both Malloy and Foley have proffered tallies that differ from both sets of figures.

According to Bysiewicz's count, Malloy won by an unofficial margin of 3,100 votes out of 1.1 million cast. State law necessitates a recount if the margin of victory is less than 2,000 votes.

Foley maintains that he is leading in the vote count by less than 2,000 votes. He too announced on Wednesday that he would be forming a transition team, including Connecticut executives Greg Butler of Northeast Utilities and former state representative Brian Flaherty, according to the Connecticut Mirror.

According to the AP figures, however, Foley is leading Malloy by exactly 8,424 votes.

Malloy's campaign maintains that the AP's numbers are wrong and says that he believes he won the race by 11,000 votes, according to the Hartford Courant. "We are aware what the AP is reporting, and we're confident they're wrong," Malloy campaign manager Dan Kelly told the Courant. "Their numbers for New Haven are wrong, and they're leaving out a significant number of votes in Bridgeport."

"We are transitioning. Period," Malloy said. "I am quite confident about what is going to happen and what the outcome is going to be. The people of the state of Connecticut expect an administration to take office on Jan. 5 to deal with the massive issues that confront Connecticut: jobs, electric rates, balancing the budget. I have got to move forward. The people of Connecticut, I believe, hired me to do just that.''

Bysiewicz has yet to release the official vote count. According to state law, she has until November 25 to certify the results.

Malloy said that his running mate, Nancy Wyman, and longtime Democrat Timothy Bannon will helm his transition team. (He also named Bannon as his chief of staff.)

The Connecticut race is one of the closest to date in state history, and results may be complicated by the fact that in Bridgeport, a heavily Democratic district, many city polling places ran out of paper ballots. Long lines resulted, and some voters were given photocopied ballots to fill out. The ballots were counted by hand, and a dozen polling locations in the city remained open until 10 p.m. to make up for the errors, but some Republicans are said to be questioning the procedures followed.

Of forming a transition team, Foley said he wanted to be prepared in the event that things turn out in his favor. "We're still trying to find out what the official vote count is," he said, according to the Washington Post. "We're going to have to start getting ready in case we're confirmed to be the winner."

A spokesman for Secretary of Bysiewicz said this morning that she would be announcing the final vote tally on Thursday at around noon, and in a radio interview on Thursday morning, Busiewicz cited incomplete totals in New Haven as the source of discrepancies in reports, according to the Courant.

But the Washington Post reports that during the Thursday afternoon press conference, Bysiewicz said her office would not release an official tally until all of the results for Bridgeport had been submitted. She did not offer an estimate of when that might be.

Foley told the Courant that he would wait until the numbers were released to take further action. "We don't want to be presumptuous," he said. "Our numbers show us as having won. We're not saying I'm the governor-elect."