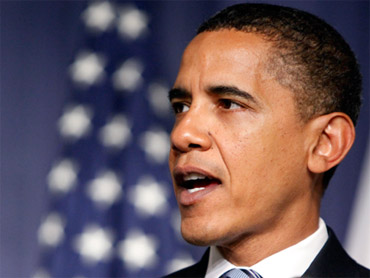 (AP)
Next Tuesday at noon, President Obama will be delivering what the White House is billing as "a national address to the students of America."

"During this special address, the president will speak directly to the nation's children and youth about persisting and succeeding in school," according to Education Secretary Arne Duncan. "The president will challenge students to work hard, set educational goals, and take responsibility for their learning."

The Department of Education encouraged teachers to build lesson plans around the speech and offered "educators a menu of classroom activities…to help engage students in the address and stimulate classroom discussions about the importance of education."

The Department also recommended that students be asked to write a letter to themselves on "how to help the president."

All this did not sit well with Jim Greer, the chairman of the Florida Republican Party. Greer released a blistering statement earlier this week claiming that the president is trying to "indoctrinate America's children to his socialist agenda."

"The idea that school children across our nation will be forced to watch the President justify his plans for government-run health care, banks, and automobile companies, increasing taxes on those who create jobs, and racking up more debt than any other President, is not only infuriating, but goes against beliefs of the majority of Americans, while bypassing American parents through an invasive abuse of power," he said.

Added Greer: "President Obama has turned to American's children to spread his liberal lies, indoctrinating American's youngest children before they have a chance to decide for themselves."

Some conservatives began to suggest that students hold their children back from school: Politico notes that conservative talk show host Tammy Bruce pushed on Twitter for followers to "Make September 8 Parentally Approved Skip Day. You are your child's moral tutor, not that shady lawyer from Chicago." Conservative radio host Dana Loesch also pressed parents to keep their children out of school Tuesday.

In response to the uproar, the White House has now altered its recommendations. The recommendation that students write a paper on how to help Mr. Obama has been changed to one urging teachers to have them "write letters to themselves about how they can achieve their short-term and long-term education goals," as the Washington Times reports.

White House spokesman Tommy Vietor told the Times that there would not have been such an angry reaction from some quarters had people actually heard the speech, which he said is focused exclusively encouraging children to stay in school and work hard, not policy or political issues.

A White House official acknowledged to the newspaper that some of the initial recommendations from the Department may not have been worded as carefully as they should have been, particularly as it was not yet known exactly what the president planned to say.