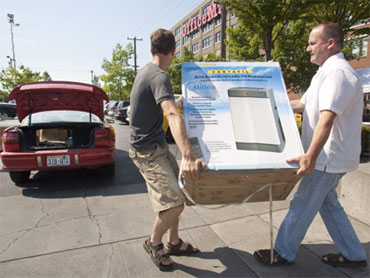 American consumers opened their wallets and pocketbooks a bit more in June, increasing their spending for the second straight month while saving a bit less, even as incomes fell sharply.

Consumer spending is closely watched because it accounts for about 70 percent of total U.S. economic activity. The increase could provide a lift to the economy, but may be hard to sustain if incomes continue to fall.

The Commerce Department said Tuesday that consumers boosted their spending 0.4 percent in June, slightly ahead of analysts' estimates. That comes after spending rose 0.1 percent in May.

Personal income fell 1.3 percent after rising by the same amount in May, when incomes were boosted by one-time payments from the Obama administration's stimulus package. Economists expected personal incomes, the fuel for future spending, to fall 1 percent.

Amid the longest recession since World War II, the personal savings rate has surged as Americans seek to rebuild their nest eggs after home values and stock portfolios plummeted last year. While saving can be good in the long run, rapid increases in saving can slow the economy.

The department said the personal savings rate fell to 4.6 percent in June, after jumping to 6.2 percent in May, which was the highest since February 1995. The rate dropped as low as 1 percent at times last year.

The department also revised its spending and income data back to 1929, as it did last week when it reported second-quarter gross domestic product, the broadest measure of the economy's output. The changes show that Americans saved slightly more than previously thought.

For example, the department revised the savings rate in 2008 to 2.7 percent from 1.8 percent.

Sluggish consumer spending has held back the sales of food and beverage companies. Tyson Foods Inc., the world's largest meat producer, said Monday that sales fell 3 percent in its third quarter. The company posted a strong profit due to cost cuts.

And sales for MillerCoors, the U.S. joint venture owned by Molson Coors Brewing Co. and SABMiller, increased by only 1 percent in the most recent quarter, Molson Coors reported Monday.