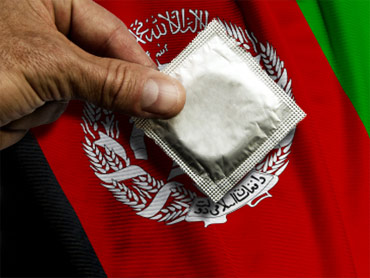 Some mullahs in Afghanistan are distributing condoms. Others are quoting the Quran to encourage longer breaks between births. Health experts say contraception is starting to catch on in a country where one in eight women dies during pregnancy.

Afghanistan has one of the world's highest fertility rates, averaging more than six babies per woman despite years of war and a severe lack of medical care. Awareness of, and access to, contraceptives remains low among many couples, with UNICEF estimating 10 percent of women using some form of birth control.

But use of the pill, condoms and injected forms of birth control rose to 27 percent over eight months in three rural areas - up to half the woman in one area - once the benefits were explained one-on-one by health workers, according to the report published Monday in Bulletin, the World Health Organization's journal.

"The main take-home point is that for women who do not want to be pregnant now, it can be a double tragedy for her to die from a pregnancy she did not want - especially when we could have helped her," said lead author Dr. Douglas Huber, who conducted the study for U.S.-based nonprofit Management Sciences for Health. "The fastest, cheapest, easiest way to reduce maternal deaths in Afghanistan is with contraception."

Quotes were used from the Quran to promote breast-feeding for two years, while local religious leaders, or mullahs, joined community and health leaders to explain the importance of spacing out births to give moms and babies the best chance at good health.

In total, 37 mullahs endorsed using contraceptives as a way to increase the time between births, some delivering the message during Friday prayers. The mullahs' major concerns centered on safety and infertility, the report said.

"All the mullahs at the community level knew of these things that the Prophet Muhammad himself advised his followers," Huber said. "This was not a hard sell."

Islam, unlike Catholicism, does not fundamentally oppose birth control. Everything from vasectomies to abortions are supported in various parts of the Muslim world.

Many Afghan mullahs are very open about promoting family planning, said Farhad Javid, program director of Marie Stopes International, a British-based family planning organization in Kabul. He was not involved in the study, but said his organization has trained 3,500 religious leaders nationwide on the issue since 2003. It distributed more than 2 million condoms last year.

"In a couple of districts, mullahs were taking our condom stocks and selling them during (night) prayers because the clinics were not open after 4 o'clock," Javid said.

During the study from 2005-2006 - which involved 3,700 families in three rural areas with different ethnic groups, including both Sunni and Shia Muslims - the Health Ministry collaborated with nonprofit organizations to spread the word that using birth control was 300 times safer than giving birth in Afghanistan. They also involved husbands in the project and sought to dispel beliefs that contraceptives have negative side effects, such as infertility.

Dr. Matthews Mathai, a maternal health expert at the World Health Organization in Geneva, cautioned that the program may be difficult to expand nationally due to high costs, intensive training and the country's continuing conflict. He also said some women may prefer to have large families, fearing child deaths.

"It's good to see there are results coming out of Afghanistan," said Mathai, who was not involved in the research. "Clearly, it takes the religious leaders and the men to get some change. It would be good if this could be replicated, but in the long run, it has to be sustainable."

The Health Ministry plans to expand the program nationally. Huber said USAID, the European Union and the World Bank are involved in the scale-up. The pilot study was funded by the William and Flora Hewlett Foundation.