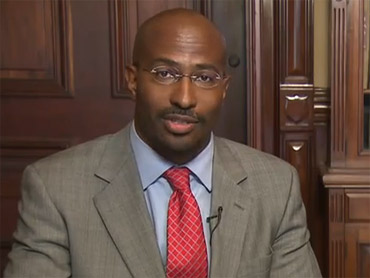 Van Jones, an administration official specializing in environmentally friendly "green jobs" with the White House Council on Environmental Quality was linked to efforts suggesting a government role in the 2001 terror attacks and to derogatory comments about Republicans.

The resignation comes as Obama is working to regain his footing in the contentious health care debate.

Jones issued an apology on Thursday for his past statements. When asked the next day whether Obama still had confidence in him, White House press secretary Robert Gibbs said only that Jones "continues to work in the administration."

The matter surfaced after news reports of a derogatory comment Jones made in the past about Republicans, and separately, of Jones' name appearing on a petition connected to the events surrounding the Sept. 11, 2001 terror attacks. That 2004 petition had asked for congressional hearings and other investigations into whether high-level government officers had allowed the attacks to occur.

"On the eve of historic fights for health care and clean energy, opponents of reform have mounted a vicious smear campaign against me," Jones said in his resignation statement. "They are using lies and distortions to distract and divide."

Jones said he has been "inundated with calls from across the political spectrum urging me to stay and fight."

But he said he cannot in good conscience ask his colleagues to spend time and energy defending or explaining his past.

Jones flatly said in an earlier statement that he did not agree with the petition's stand on the 9/11 attacks and that "it certainly does not reflect my views, now or ever."

As for his other comments he made before joining Obama's team, Jones said, "If I have offended anyone with statements I made in the past, I apologize."

His apologies did little to quiet Republican demands that the resign.

Rep. Mike Pence of Indiana called for Jones to quit, saying in a statement, "His extremist views and coarse rhetoric have no place in this administration or the public debate."

Nancy Sutley chair of the council, said in a statement released early Sunday that she accepts Jones resignation and thanked him for his service.

"Over the last six months, he had been a strong voice for creating jobs that improve energy efficiency and utilize renewable resources," she said. "We appreciate his hard work and wish him the best moving forward."

CBS News chief political consultant Mark Ambinder says, however, that Jone's departure is "not much" of a moral victory for Republicans, nor is it all that significant politically.

Ambinder said that while conservative talk show host Glenn Beck, "has a scalp… Very few people knew who Van Jones was before yesterday, and even though the White House thinks Beck is a racist conspiracy monger, it did not affect their judgment in asking whether it was worth time and effort to defend a guy who used to be a communist, who called George W. Bush a fascist, and who found himself in close company with people who believe that 9/11 was a government conspiracy."

Here is the text of Jones' resignation statement sent to Chair Nancy Sutley:

"I am resigning my post at the Council on Environmental Quality, effective today.

On the eve of historic fights for health care and clean energy, opponents of reform have mounted a vicious smear campaign against me. They are using lies and distortions to distract and divide.

I have been inundated with calls - from across the political spectrum - urging me to 'stay and fight.'

But I came here to fight for others, not for myself. I cannot in good conscience ask my colleagues to expend precious time and energy defending or explaining my past. We need all hands on deck, fighting for the future.

It has been a great honor to serve my country and my President in this capacity. I thank everyone who has offered support and encouragement. I am proud to have been able to make a contribution to the clean energy future. I will continue to do so, in the months and years ahead."