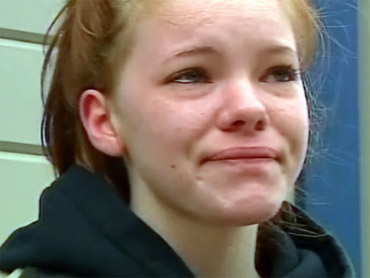 A surveillance camera caught a man stealing hundreds of dollars from a Girl Scout in Tacoma, Wash.

Police hope the surveillance video can help them crack the cookie case.

The footage shows scout Beverly Reed, 16, standing behind a table last week alongside her mother outside a Safeway store.

A man dressed in a blue-hooded shirt and gray cap is seen running up to Reed, grabbing $465 and taking off, leaving her heartbroken.

A teary-eyed Reed said, "I've been doing this for ten years and that's never happened to me - and (on) the last weekend of cookie (sales) -- and someone just steals from me. It's very
upsetting. .. It's a very tragic experience for me."

Reed says the thief watched her for some time, waiting for the perfect opportunity to strike. He finally made his move as it began to rain and Reed began packing up her cookies. As she bent over, the cookie bandit
snatched the cash.

Reed yelled, "I can't believe that you did that! It's very rude!" But the thief got away.

She called 911 on her cell phone and ran into Safeway to get help.

When word of the theft spread, Reed's community stepped-up with donations to cover her losses.

One man gave her $500. And a radio station donated nearly $1,000. Reed's giving the extra money to a program that sends Girl Scout cookies to troops in Iraq and Afghanistan.