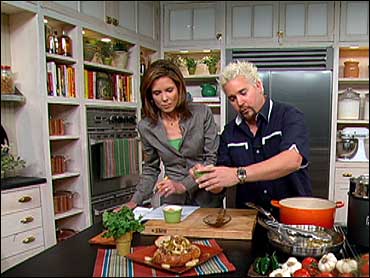 (CBS/The Early Show)
Television executives are getting into the kitchen in search of some heat, with Bloomberg reporting record ratings for cable's new, food-themed programming.

The Food Network's prime-time numbers have more than doubled since 2004, and the recent season finale of "The Next Food Network Star" was the channel's most-watched show ever. The second season start of "Man v. Food," a Travel Channel show that involves watching host Adam Richman eat (and eat…), was watched by 1.25 million households.

These programs, and many others, don't look anything like typical cooking shows. They've successfully borrowed ingredients from reality TV, like exotic locations and judged competitions. In fact, as the real estate market continues to fumble, food shows are happily replacing home makeovers as the newest spectator sport. Within the last year, TLC has dropped "Trading Spaces" and "Flip that House" and added another cooking show, "Ultimate Cake Off."

Grocery and kitchenware stores are not guaranteed a similar boom in sales, however. While Americans are happy to eat it and watch it, we're hesitant to cook food ourselves. In a recent New York Times article, author Michael Pollan says "the average American spends a mere 27 minutes a day on food preparation"—about half the time it takes to watch "Top Chef."