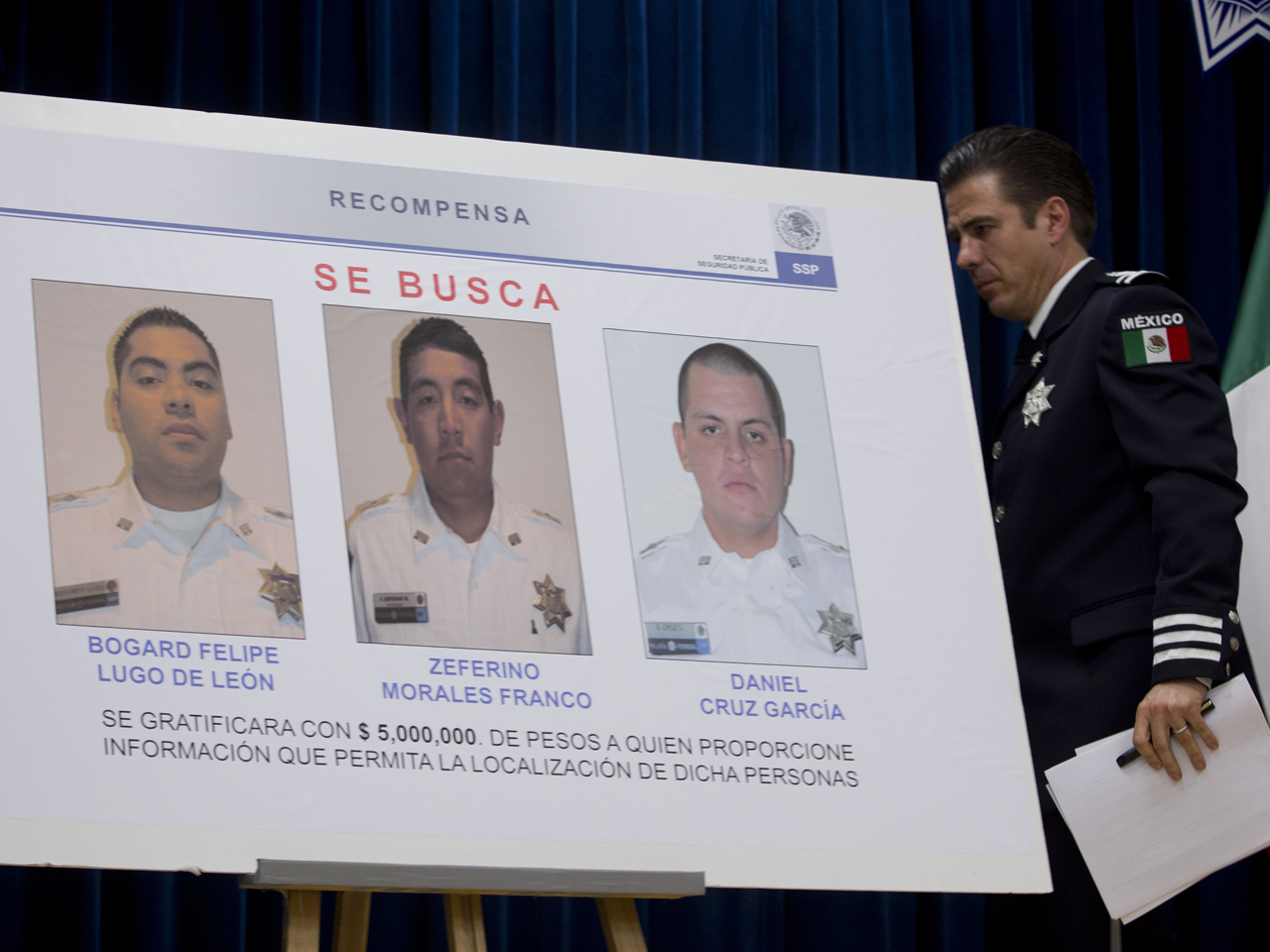 (AP) MEXICO CITY - Mexican authorities have identified two federal police officers who shot dead three of their colleagues at Mexico City's international airport this week and say the shooters were part of a trafficking ring that flew in cocaine from Peru.

Luis Cardenas Palomino, the federal police's regional security chief, said Thursday that the slain officers were trying to arrest officer Zeferino Morales Franco at the food court of the airport's Terminal 2 when agent Daniel Cruz Garcia arrived and shot the arresting officers from behind.

Authorities are also looking for a third officer, Bogard Felipe Lugo de Leon, who is the suspects' supervisor and who abandoned his post at the airport shortly after the shooting, Palomino said. The three remain at large.

The government is offering a $360,000 reward leading to the capture of the officers, who Palomino described as "traitors."

Photographs on Lugo's Facebook page show him holding a high-powered rifle and handguns, and posing in front of his patrol car or a federal police airplane. He also has photos of himself carrying a baby girl he identifies as his 7-month-old daughter.

Lugo's comments on his Facebook page seem to suggest he was recently assigned to Mexico City's airport and that before then he was in the resort city of Cancun.

Palomino said that for several months authorities had been investigating a cocaine trafficking ring that involved passengers arriving from Peru's capital, Lima. He said other government officials working at the airport are involved but didn't identify them.

"We know there must be other authorities involved in trafficking and that's what we are investigating," he said.

Passengers would allegedly bring cocaine hidden on their body or in their luggage, and drop it off in bathrooms before reaching the immigration and customs check area.

Corrupt officials would then circle back to pick up the drugs, Palomino said.

The federal Public Safety Department had conducted an 18-month investigation into corrupt federal police officers and other officials who were part of the alleged cocaine trafficking ring. The operation has seized 648 pounds (294 kilograms) of cocaine at the airport, Palomino said.

Since January, seven passengers arriving from Lima have been detained carrying cocaine, he added.

On Monday, the day of the shooting, federal officers watching surveillance cameras saw Morales go into a bathroom shortly after the arrival of a flight from Lima. Two officers approached Morales once he was in the food court area and told their boss in a radio call that he was carrying drugs; that's when the officers were attacked, Palomino said.

A third officer who was nearby for support fired at the attackers but he was wounded and later died at a hospital, he said.

The shooting sent terrified people waiting for their flights diving to the floor for protection.

Palomino said Morales and Garcia got away in a taxi. He said phone records show Morales called Lugo as he was leaving the airport.

Surveillance cameras captured Lugo leaving in his own car, he said.