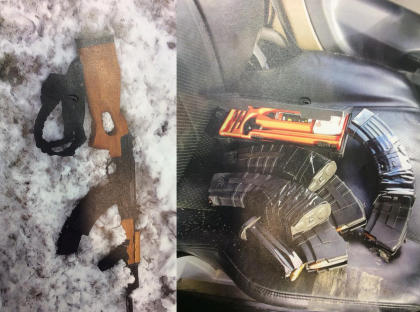 WATERFORD, Mich. – A Michigan man armed with an AK-47 killed two people in what police called "a planned killing spree" Thursday before being wounded by police in a shootout, reports CBS Detroit.

Authorities say the suspect, a 45-year-old Sterling Heights man, walked into a trucking company on Pennsylvania Avenue in Taylor Thursday morning, and shot and killed the manager.

According to Sheriff Mike Bouchard, the suspect then stole a white semi truck and drove to another business, Aluminum Blanking in Pontiac, where he shot and killed a second man. He then went to the a third business, Assured Carriers in Waterford, where he asked for another man who wasn't there.

Bouchard said that when the suspect left that business in the truck, police were behind him with their lights and sirens on. "He stopped the truck, shot at him, got back in the truck, continued to flee until the crash," the sheriff said.

Witnesses reportedly saw the man speed through an intersection and hit at least two vehicles. The man got out of the vehicle and police say he engaged them in gunfire.

Bouchard noted that the suspect was out on bond for a December assault with a dangerous weapon at the time of these shootings.

The sheriff said that the weapon recovered at the scene was "an AK-47 with double-tapped, taped together 30-round magazines." Inside of the truck, Bouchard said investigators found multiple additional magazines.

Bouchard said it's fortunate that the suspect was stopped before anyone else was hurt. "When you've got a person, clearly, that stops in the middle of the road, turns around, gets out and starts shooting at police cars.… He doesn't care about anything or anyone after he's already killed."

The victim in Pontiac has been identified as 58-year-old Eriberto Perez. He was shot multiple times in the back and Bouchard said investigators are certain that he was specifically targeted.

"The suspect appeared to know exactly where he was going, went directly into this building, made turns and through doors and engaged this one person only and then left," Bouchard said.

The name of the man killed in Taylor was not immediately released.

Nick Verhey, who works at Assured Carriers, told the station he came face to face with the gunman.

"He was standing right there and said, 'What are you doing?' And I couldn't hardly understand him, but I think he told me, he said, 'I'm not looking for you,'" Verhey said. "And that's when I slammed the door in his face and locked the door."

Verhey and a coworker climbed out his office window, called 911, and gave police a description of the truck and the suspect. No one was hurt at Assured Carriers.

Verhey added that he has no idea what might have prompted the rampage.

"He was just a normal truck driver; he did local trucking for us, " Verhey said. "I mean, we never had any words with the guy or anything.… He quit on us twice and we actually rehired him the second time, but…he never seemed to have a problem here."

Bouchard said two people were hurt in the crash in Waterford, but their injuries were described as non-life-threatening.