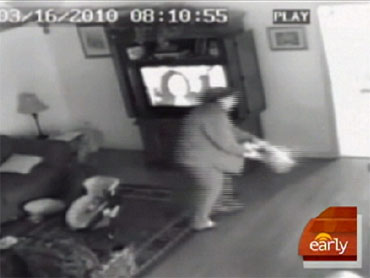 A Jacksonville, Fla. babysitter police say was caught on camera swatting, throwing, slapping and kicking an eleven month old boy told an investigator she did it out of anger at his parents, according to an arrest report cited by The Florida Time-Union.

Jeannine Marie Campbell, 53, has been charged with battery on a child. She was arrested earlier this week and remains jailed on $75,000 bail.

Authorities say the boy's parents, whose names weren't disclosed, have two children. They told police they noticed a black eye on one of the two about eight weeks ago, and Campbell couldn't explain what happened, so they installed a hidden camera.

The parents fired Campbell late Tuesday afternoon because they were unhappy with the care she provided, though they didn't indicate they saw any abuse when the made the decision, the report said.

After firing Campbell, the parents watched the video from Tuesday and called authorities to report abuse, the report continued.

Police reviewed the video and saw the child picked up and slung into a playpen, hit in the head with a ball, slapped, hit with a towel, swatted 11 times and kicked, the arrest report said.

"Throughout the video, Ms. Campbell's demeanor appeared very angry, and it was obvious that she was abusing the child and not playing with him," one officer wrote in the report.

Campbell told an investigator said she knew about the video, adding she was mad at the parents and took it out on ther child, the report said.

What can parents do to try to make sure the person they hire to watch their kids when they're not home is trustworthy?

Licensed private investigator Adrienne Kallweit did her own background check on her son's teacher, who she was going to hire as an after-hours babysitter, and found what she called shocking information the state screening process had overlooked. So, the Tulsa, Okla. Woman says, she's made it her mission to help other parents find safe childcare nationwide through her company, Seeking Sitters.

On "The Early Show Saturday Edition," Kallweit offered advice to parents finding the right person to care for their kids in their absence.

To watch the interview with CBS News correspondent and "Morning News" anchor Betty Nguyen, click on the video below. We caution you that it contains very brief bits of the graphic surveillance video police say the victim's parents recorded.