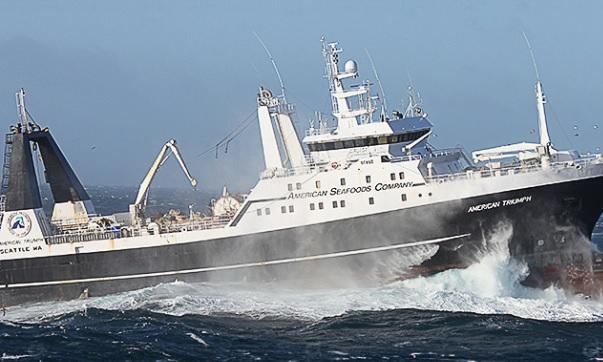 Unalaska, Alaska — A factory fishing vessel that docked in the Alaska fishing port of Dutch Harbor in the Aleutian Islands had 85 crew members on board infected with the coronavirus, officials said.

The boat, named the American Triumph, has departed the Dutch Harbor community of Unalaska and will travel hundreds of miles to the community of Seward, arriving Wednesday, Alaska's Energy Desk reported  Sunday.

The 85 infected workers represent more than two-thirds of the crew on the ship owned by Seattle-based American Seafoods Group LLC, one of the biggest firms in the billion-dollar Bering Sea pollock fishing sector.

The crew members who tested positive and medical personnel will be taken to Anchorage for further care and monitoring after the ship gets to Seward.

American Seafoods spokeswoman Suzanne Lagoni said all crew members will be housed in a secure facility in Anchorage.

The Triumph will be "deep cleaned and sanitized" before continuing to fish for pollock in the Bering Sea, Lagoni said.

Coronavirus: The Race To Respond

Lagoni cited privacy protection when declining to provide a breakdown of the nationalities of crew members.

"We are proud of the diversity of our crews," Lagoni said. "They all have the right to work on our vessels."

After the seven workers tested positive, the remaining 112 crew members were screened by Unalaska clinic Iliuliuk Family and Health Services.

All crew members were restricted to the vessel or isolation locations while the ship was docked in Unalaska, city officials said.

Unalaska is the largest community in Alaska without a critical access hospital, and the nearest emergency room is almost 1,000 miles away, in Anchorage.

American Seafoods staffed the ship with an additional paramedic to assist crew members during the sailing, while the vessel plans to hug the coast for easier evacuation if necessary, said Melanee Tiura, chief executive of the Iliuliuk clinic.

"There are exit strategies if that additional level of care is needed," Tirua said.