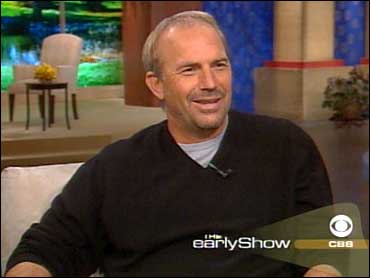 His newest movie is an action-packed adventure thriller, "The Guardian."

Costner portrays a hardened veteran Coast Guard rescue swimmer who's an instructor of some of the best and brashest recruits that branch of the military has to offer.

On The Early Show Friday, co-anchor Harry Smith remarked that one of the first things he was struck by when he watched "The Guardian" was that Costner is cast as "the old guy."

Smith said it seems like yesterday when Costner was "the kid on horse back" in "Silverado."

"Yeah," Costner responded, "well, part of me is always gonna be the guy that wants to kiss the girl, too, and get in a lot of bunch of trouble for it, and now ya gotta shoot your way out. No, movies have been a great ride for me. Part of it is I like movies myself, so I pay to go see them.

"I have always felt the test of a movie is not what it's opening weekend is, but will you take it off the shelf five years from now? 20?"

Costner's character is one of the Coast Guard rescuers made famous buy their exploits in the aftermath of Hurricane Katrina, who flew at great personal risk under extraordinarily trying circumstances to rescue people.

"A lot of times, when people are in trouble, it's not blue bird weather," Costner observed. "In Katrina, you're dealing with electrical wires and 1,000 situations.

"Usually, when somebody needs saving, it's not pleasant conditions. Nature's not usually helping."

Costner co-stars with Ashton Kutcher, one of the young ones in this film, and a rising star.

"But I had a lot of trust in him. We had an agreement. We were gonna to be in some tough positions, and we never wanted to deal with somebody crying wolf because we're out in the ocean — 'Is this a gag or not?' — because, if he's in trouble, I'm gonna go get him and likewise if I'm in trouble. We needed that. I really needed that and he totally understood it."

Costner added that he came away from the filming with extremely high regard for real-life Coast Guard rescuers: "I've been able to live in people's worlds, and one thing I've always known is that I have to go in and respect it. They know what their world looks like, and if you dink around, they're gonna go, 'Wait a second'; baseball player, you want to look their world and know it.

"Same with this. The good thing for me is I feel good that I'll always be associated with the Coast Guard now. But the one interesting thing that came out of it was, they came out kinda scratching their heads a little bit and feeling good, going. 'Ya, know, I've never been able to explain to my wife what I do.' "