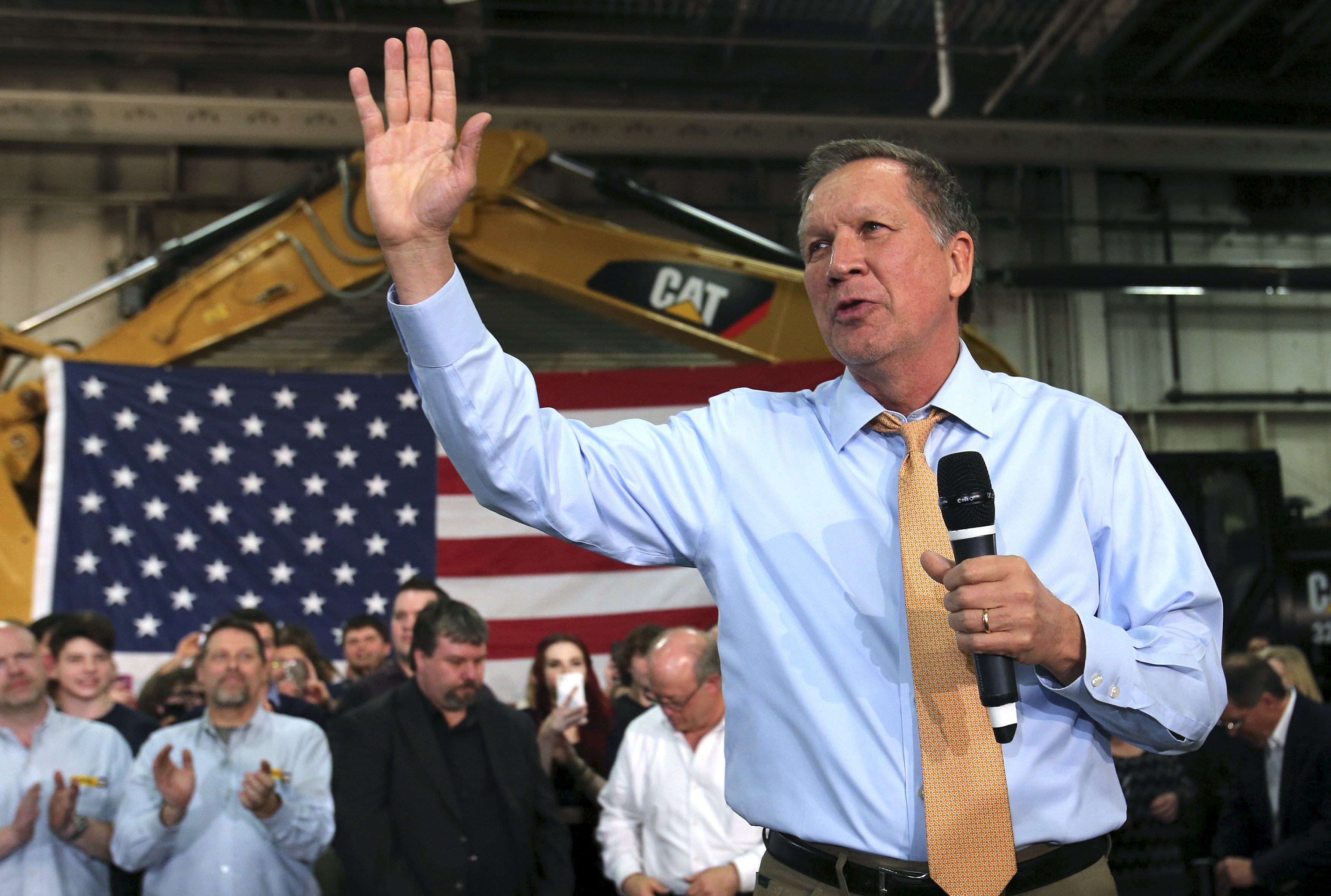 He's never come close to leading a national poll. He has fewer delegates than all of his opponents. He hasn't even won a state yet. And yet John Kasich might - might! - be about to become a real contender for the Republican nomination.

Unlikely? Yes. But not impossible. Start with a process of elimination for the other candidates. To quickly break it down: Donald Trump is the most polarizing political figure in living memory - the frontrunner, yes, but one who still alienates a wide swath of Republican voters: a recent Gallup poll found that 63 percent of American adults hold an unfavorable view of him; Ted Cruz is a right-wing ideologue with a limited long-term appeal outside red states; Marco Rubio appears to have flat-lined, despite major resources, the support the GOP establishment, and arguably the most consistently favorable media coverage of anyone running, Republican or Democrat.

They're all exceptionally flawed candidates, in other words, but more importantly those flaws have all become pretty well-known to the electorate. But while they were all tearing each other to bits in their attack ads and debate performances, Kasich, it appears, was quietly gaining strength. A Wall Street Journal/NBC poll out this week found him overtaking Rubio nationally. Were it not for Rubio, he probably could have won Michigan Tuesday night.

The fact that he's been discounted for so long may finally be working to his advantage. It appears that, to the extent that rank-and-file Republicans have an opinion of him, he seems boring, safe, the classic guy you don't fall head-over-heels for, but might be the one you'd be wise to settle for. And to your traditional Republican voter -- or at least the kind who's scandalized by Trump's increasingly vulgar boasting -- boring might suddenly become a really compelling trait.

Could he win enough delegates to avoid a contested convention? Not a chance, a fact Kasich understands. His plan is all about winning Ohio, which he has very good chance of doing next week, and then pulling off an upset at the convention. How? By offering himself as a consensus candidate for a deeply fractured party.

Like Trump, Kasich is an enthusiastic booster of the welfare state who was lecturing his fellow Republicans about their Christian duty to help poor people long before Trump turned not letting people die in the street into an applause line. Like Cruz, he's a staunch social conservative. And like Rubio, he's a known quantity to party bosses and donors, the establishmentarians increasingly desperate to do something, anything to stop Trump.

Plus, unlike Cruz and Trump, Kasich can argue convincingly, that he can win in November. He is, after all, the popular governor of Ohio - a state essential to the GOP's presidential prospects. He even won 26 percent of the black vote in his landslide 2014 re-election victory. (The Democratic candidate that year was a disaster, but regardless, that's an essentially unheard of accomplishment for a conservative Republican in a purple state.) Should that appeal translate over to other rust-belt states like Michigan and Pennsylvania, the Democrats start looking like they're in real trouble.

Kasich is not without his liabilities and his quirks. He's deftly marketed himself as the nice-guy candidate despite being known as -- to use the term his press people prefer -- "prickly." But he's also the guy who polls best against Hillary Clinton, who's stayed above the fray (and therefore avoided alienating the his rivals' supporters too much), who can make a real pitch to both the pro- and anti-Trump wings of his party, and who might be surging just in time to take the race to Cleveland.