What happens when a political party doesn't have one voice speaking for it?

The floor is wide open to everyone: radio talk show hosts, party chairmen, former presidential candidates, former vice presidential nominees, governors, members of Congress, and those who used to be in power but no longer hold office. 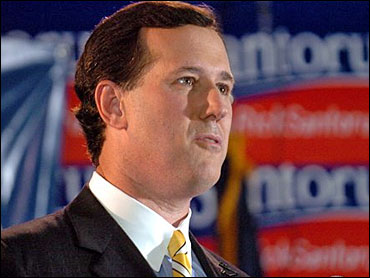 Yes, the same Rick Santorum who lost his U.S. Senate seat in 2006 with only 41 percent of the vote.

The same Rick Santorum who's a Sarah Palin-esque lightning rod who regularly sent the left into a tizzy with his anti-abortion rights and anti-homosexual views.

Well, this week, he's headed to Iowa - the first in the nation presidential caucus state - to deliver speeches in Des Moines and Dubuque, not because he's running for president in 2012 ("It's three years away. ... I have no plans. ... it's not that I'm not going to plan...") but because, as he told reporters on a conference call today, the Republican Party "needs to have voices out there to try to direct the opposition."

"We're the opposition party and we're not doing a heck of a job in my mind of articulating why we're opposing and, just as importantly, articulating solutions to the problems that confront America and this is an opportunity for me to do that," Santorum said.

Two weeks ago, however, he was a little more forward about his 2012 interest.

"A lot of people are going to take a look and see what they can do to try to confront this presidency, which many of us - as you're seeing from the tea parties and the like - which many of us believe is injurious to America." He added that a presidential run is "something that I think I would consider."

So, how can someone who's been out of office for nearly three years (after suffering a landslide defeat) be a qualified possible presidential candidate?

"I write a column for the Philadelphia Inquirer, I do Bill Bennett's 'Morning in America' show every Friday morning for three hours, I do speeches around the country," he said.

"I have 16 years of doing. I have 16 years of a record that I would put up against any person over those 16 years of accomplishments," he added. "I have a pretty good record of tapping into the concerns of the American public, articulating those in Washington, D.C. ... and effectively following through and passing legislation."

But really, what chance does Santorum have? How can he compete with the likes of Palin, Mitt Romney, Mike Huckabee, Tim Pawlenty, Newt Gingrich, etc.? Will anyone actually listen to him?

"He has the ability to galvanize the conservative base of the Republican Party ... in a way none of the other possible candidates can do," Delano told CBS News.

"He's well-known to conservative activists and the media will naturally follow him because he will be provocative," he added.

And being provocative is something Santorum shares with Palin and alluded to on his conference call today.

"The media enjoys covering her. She's colorful. ... You make good copy and you get a lot of ink," Santorum said.

However, while Delano thinks Santorum could be a "serious candidate," he feels that this isn't about the presidency for Santorum, since "the problem is he's a difficult general election candidate because he's perceived as being very divisive."

"I see him as really positioning himself for a vice presidential slot," Delano added.


Steve Chaggaris is CBS News' Political Director. You can read more of his posts in Hotsheet here.