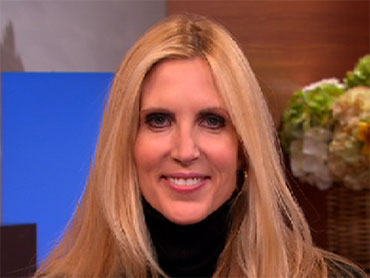 Conservative firebrand and author Ann Coulter calls today's elections less predictable than any other she can think of.

"I've never seen so many close races," she explained to "Early Show" co-anchor Harry Smith. "I think we have a feeling that people are angry about health care and the stimulus bill, and Republicans will pick up seats in the House. … I don't think we ever had a chance to take the Senate. But, it doesn't really matter. (In) the Senate, a minority party has a lot of power. In the House, a minority power has no power whatsoever. If we take, we Republicans, just the House of Representatives, that's enough to stop a lot of the crazy things."

"Americans just weren't asking for national health care," Coulter remarked. "Didn't want it. They wanted Obama to focus on the economy. And there was so much anger then. Now … we're going to find out tonight how much people are still paying attention, and still angry about it."

And Coulter said Americans could intra-GOP disputes in Congress if, as pollsters predict, many candidates from the Tea Party are swept into office.

"I think there's going to be a lot of butting of heads," Coulter said."And I'm with the Tea Partiers on this one. The establishment Republicans, an awful of them -- a lot of Republicans are fantastic, and really do care about principle. But a lot of them just want their jobs. You saw it in a lot of the primaries, the butting of heads.

"But this is a movement that can't be stopped. I think (pro-Tea Party voters) are going to keep paying attention this time. And will hold both the old-guard establishment Republicans, and the Tea Party Republicans, responsible."

To see the entire interview, click on the video below: