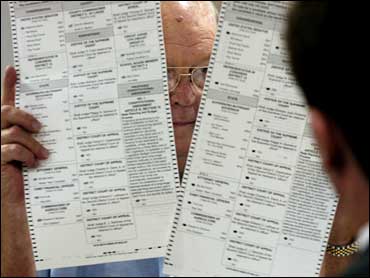 The nail-biting isn't over. Most of Tuesday's election results may be in the history books, but Senate candidates and political observers in three states were still counting votes Wednesday with the outcomes uncertain.

Miller defeated Murkowski her in the GOP primary by just 2,006 votes and the prospect for a battle over ballots loomed Wednesday.

Colorado was also bracing for a possible recount, with neither contender declaring victory by early Wednesday.

Democratic Sen. Michael Bennet and Republican Ken Buck were within a few thousand votes of each other with more than 1.4 million ballots counted.

Thousands of provisional and write-in ballots remained to be tallied, and some projections showed the race could end up within half of 1 percentage point, which would trigger an automatic recount under Colorado law. Both Democrats and Republicans said last week they'd be ready for a possible recount.

And in Washington State, Democratic Sen. Patty Murray headed into a second day of vote-counting in her toughest re-election contest yet, holding a small but clear lead over Republican Dino Rossi as mail-in ballots trickled into county election offices.

It wasn't the first time Washingtonians have gone to bed without knowing the winner in a major election. In 2004, Rossi waged a historically close campaign for governor that wouldn't end until the following summer. Four years before that, Democrat Maria Cantwell beat Republican Sen. Slade Gorton by about 2,000 votes after a re-count.

Murray and Rossi's 2010 contest wasn't in that league after Tuesday's tallies, but it remained too close to call. With more than half the expected ballots counted, Murray led with about 50.5 percent to Rossi's 49.5 percent. Her margin was about 14,000 votes out of more than 1.4 million already counted.

Read on for more details about each of the three cliffhanger Senate races.

With 78 percent of precincts reporting late Tuesday, write-ins ballots had about 40 percent of the vote. GOP nominee Miller had 35 percent and Democrat Scott McAdams had about 24 percent.

The numbers held virtually steady most of the night, and Murkowski, who entered Election Central with supporters chanting "Six more years!" said it was a "pretty sweet spot to be at."

She is one of 160 write-in candidates eligible for the race. And while the write-in count only speaks to total ballots cast for write-ins - not to names written on them - she believed only a smaller number would be cast aside for reasons like a voter forgetting to fill in the oval.

Campbell, who oversees elections, tells The Associated Press that because Miller's name isn't on the official list of write-in candidates, any ballots with "Joe Miller" written in won't be credited to the tea party favorite.

Some conservatives urged Alaskans to qualify as write-ins to highlight what they considered Sen. Lisa Murkowski's disruptive attempt to keep her job.

For election workers to legally be required to count names on ballots, the total of all write-in votes cast in the race must either represent the most votes received by any candidate in the race or represent the second highest total, with the difference between the number of write-in votes and the highest votes received by a candidate at less than 0.5 percent.

Lt. Gov. Craig Campbell, who oversees elections in Alaska, said he would ask the Division of Elections whether workers could begin the task of determining who the write-in vote-getters are perhaps within the next few days in an effort to avoid keeping the candidates, and citizens, in the dark for the next two weeks.

"I don't think we need to wait for an arbitrary date," he told The Associated Press. "The whole point is, we want to do the right thing and we want to do it as fast as we can."

The division has said it likely wouldn't begin counting names on write-ins, if the threshold to count them was tripped, until about Nov. 18. The first batch of absentees votes isn't expected to be counted until next Tuesday, Nov. 9.

Division Director Gail Fenumiai said she'd prefer to do the write-in count at one time, not piecemeal, but she said a decision on what approach to take would probably be made in the next few days.

A cliffhanger ending could be a fitting end to what's been a drama-filled Senate race.

Murkowski is seeking to make history as the first U.S. Senate candidate since Strom Thurmond in 1954 to win as a write-in. Her campaign saw a possible omen in the San Francisco Giants' winning their first World Series since '54 on Monday.

The race featured a rematch between Murkowski and Miller, the political upstart who won the August GOP primary with the support of Sarah Palin and the Tea Party Express - both of which re-emerged late in this race.

Miller and Murkowski, who promised to let no attack on her go unanswered, went tit-for-tat during a general election that saw McAdams, a former local school board member and mayor of Sitka, seeking to stay out of the fray and raise his own profile among Alaskans - and even Democrats - who had little idea who he was after his primary win.

Throughout the race, Murkowski stressed her seniority and cast herself as a voice for all Alaskans, not just conservatives. She also got support from the third-party Alaskans Standing Together, a PAC formed by Alaska Native corporations that reported spending more than $1.2 million to help her win.

Miller, meanwhile, said he was an outsider - in spite of getting backing from within the Republican establishment - and a reformer who would be unyielding in pushing for change in an out-of-control Washington.

Miller sought to overcome a series of campaign hiccups that he attributed partly to the inexperience of his campaign staff and his not being a "professional politician," and partly to opponents desperate to distract voters' attention from the issues.

Miller had to acknowledge that he or his family received government benefits, the likes of which he's questioned as a limited government candidate.

Also, his security detail handcuffed a journalist after a town hall - an incident that was included in a Murkowski ad against Miller.

Coloradans aren't the only ones eyeing the results. The race has attracted more out-of-state campaign money than any other Senate contest this year - almost $33 million, according to the Washington-based watchdog group Sunlight Foundation.

A Bennet win would help Democrats avoid further erosion of their Senate lead.

Buck was among the first Republicans to announce he'd try to unseat Bennet. The 51-year-old prosecutor from Weld County in northern Colorado courted tea party groups with a promise to cut spending and push for a federal balanced budget amendment. He defeated a better-known and better-funded Republican in the GOP primary, former Lt. Gov. Jane Norton.

Both candidates avoided making speeches as poll results rolled in. Instead, they issued statements predicting an ultimate win.

"This race is very close, but we believe that when every single vote is counted Michael will come out on top," said Bennet spokesman Trevor Kincaid.

Final results could take days. County elections officers have until Nov. 16 to count provisional ballots, and the secretary of state's office has until Nov. 26 to verify the full vote and order a recount.

Murray was holding onto the lead with her performance in counties in the Puget Sound region, particularly King and Snohomish. Rossi pulled ahead in Pierce County in late returns Tuesday.

At a Democratic rally in Seattle, a confident Murray predicted she would seal the victory in the coming days' vote counts. Counties were due to report more totals Wednesday, including heavily Democratic King County.

"We are winning tonight, and we are going to win even bigger tomorrow," Murray said. "We will win this race."

Meanwhile, at the Republican rally in Bellevue, an enthusiastic Rossi reminded his crowd that plenty of vote-counting remained.

"Unfortunately, we don't know what's going to happen in this race yet," he said. "There's still a lot of ballots to count, you know. But it's Washington state. What are you going to do?"

The national stakes for the Murray-Rossi race declined considerably once Democratic victories in West Virginia and Nevada ensured the GOP could not take control of the Senate.

The contest was the marquee event in a wild Washington election that featured all nine congressional seats, a near-record number of initiatives, contests in many key legislative races and more.

Murray was presumed nearly unbeatable when her campaign for a fourth term began. That changed in late May when Rossi, well-known from two unsuccessful gubernatorial runs, relented to intense Republican recruiting efforts and entered the race.

It was an expensive contest, drawing more than $19 million in third-party spending and spawning a stream of negative ads from both sides.